The number of working poor in the United States increased slightly between 2006 and 2007. The working poor are individuals who were in the labor force for at least 27 weeks during the year, but still had incomes below the official poverty level. About 7.5 million people fit that definition in 2007, up from 7.4 million in 2006. The working poor accounted for 5.1 percent of all people who were in the labor force 27 weeks or more in 2007.

These figures come from the Bureau of Labor Statistics’ (BLS) annual Profile of the Working Poor.

Younger people were more likely to be poor. The working poor rate by age group peaks at 10.6 percent for those ages 20 to 24, and then declines with each successive age group. 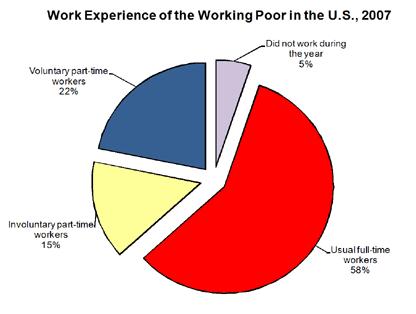 Young and Women More Likely to Be Poor

Men have a perfect inverse relationship between age and the working poor rate. Men ages 16 to 19 have the highest rate, at 10.0 percent, and then the rate drops with each successive age group. Among women, however, the highest working poor rate is for those 20 to 24 years of age, at 13.5 percent – above the 10.4 percent rate for women ages 16 to 19. 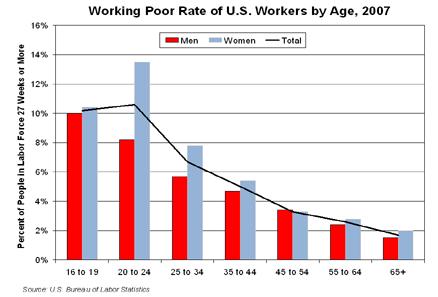 Married-couple families are the least likely of all family types to be among the working poor, with a rate of 3.5 percent overall. Those with children under 18 years have a higher rate, 5.5 percent, than those without children present (1.3%).

Education Reduces Likelihood of Being Poor

Men have lower working poor rates at almost all levels of education. The one exception is among those who completed less than one year of high school (not shown separately in Graph 3), where men had a working poor rate of 18.8 percent, while women with the same level of education had a rate of 17.4 percent. 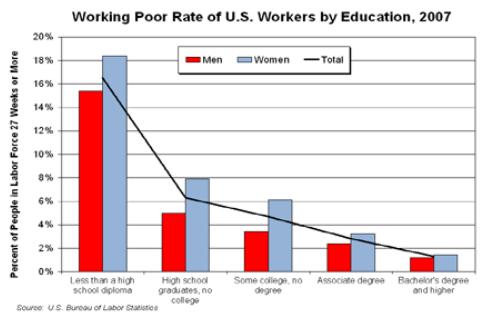 The Great Unknown
How the current recession will affect the working poor remains to be seen. Many in the media have noted that this recession is disproportionately affecting the employment of men. Many industries with high proportions of male workers have dropped jobs at alarming rates, while industries with high concentrations of women, especially educational and health services, have not been affected as severely. We may see more men among the working poor as new statistics for 2008 and 2009 become available. However, there’s also the possibility that many formerly non-working spouses of the unemployed will be on the hunt for jobs, themselves joining the ranks of the unemployed, and possibly the working poor as well.

It is also likely that the number involuntarily working part time will surge in 2008 and 2009, as full-time work becomes scarcer.