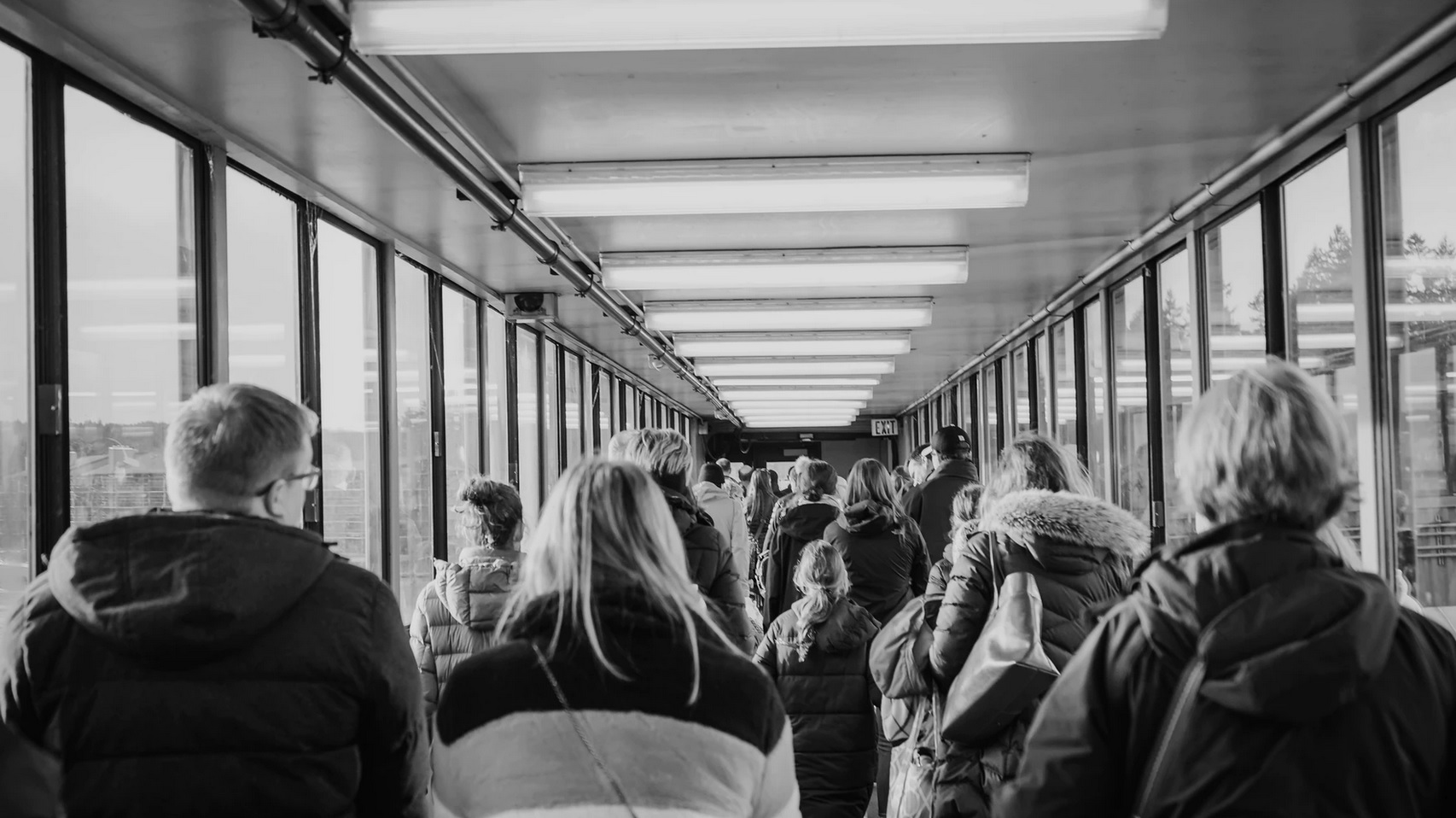 It’s no secret that many advertisements target households with larger disposable incomes. For much of the recent past this has meant Baby Boomers, who have reshaped American society in many ways as the largest generation ever. But if you paid attention to the Super Bowl this year, it felt somewhat different. At least I felt somewhat different. Both the the halftime show and many of the advertisements felt like they were targeted specifically to the no-longer-young-but-middle-age Gen X and Millennials. There are likely key reasons for this, but none bigger than demographics.

Millennials are the largest generation today, both nationally and here in Oregon. Now, Millennials have been the largest for a number of years now, but they’re finally at the point where their incomes are rising, homeownership rates are rising, and even as birthrates have fallen, the life cycle effect still outweighs the generational effect, meaning more Millennials are getting married and having kids, even if it is at a slower pace and later age. This demographic push of Millennials entering their higher-earning and more spending years will continue in the decades ahead.

These big picture demographics can be seen in our office’s estimates of Oregon’s population this year. Specifically, the single most common age in Oregon today is 31 years old. The five largest single ages are all 29 to 33 years old. The eighteen largest single ages are between 25 and 42. This is a very large cohort that will continue to impact many aspects of the economy and society in the decades ahead. 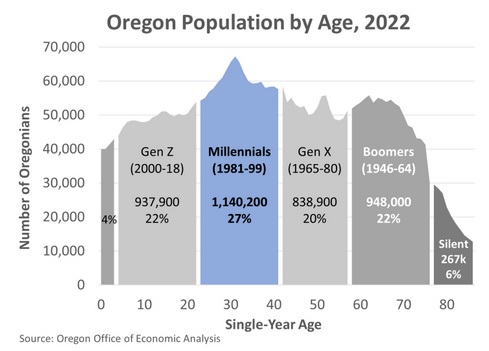 Quick Note: Definitions of generations vary depending on the researcher. Only the Baby Boomers have an explicit definition of those born from 1946 to 1964 (a span of 19 years). The chart above uses a broader cohort of birth years than, say, Pew does. The main reason is to better align the Millennials and Gen Z with the Boomers in terms of 19 year spans, and because generations should also mean something biologically. This also means that Gen X is the only generation shortchanged, like they usually are.

Now, the old saying is demography is destiny. In many ways this is true. I tend to think of Oregon has having an extra large Baby Boomer and an extra large Millennial cohort when compared with the nation. Now, those differences are not really monumental, but they are largely driven by migration patterns. Most people move in their 20s and 30s, and then set down roots. Today’s Baby Boomers in Oregon largely moved here in the 1970s and 1990s. Today’s Millennials in Oregon largely moved here in the 2000s and 2010s. Now there are large differences within Oregon where our rural communities do have very large Baby Boomer cohorts and our urban communities have both an extra large Millennial and a large Baby Boomer cohort. 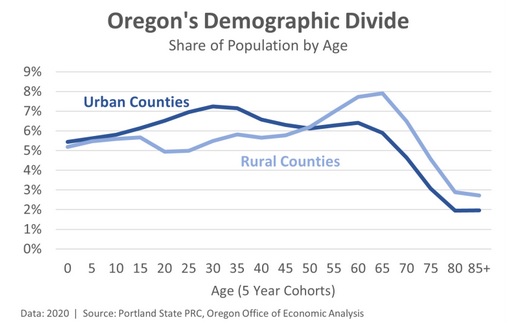 Just looking at the charts above brings to mind many economic and social implications. For instance, there is a big bulge of younger Boomers on the cusp of retirement, and then not as many Gen Z Oregonians about to enter the labor market on the front end. These dynamics are particularly pronounced in many of our rural areas. Demographics are the key reason our office expects the labor market to remain tight for the foreseeable future. A lot of the labor force growth in the years ahead is going to come from those 20- and 30-somethings who haven’t moved here yet, but will. And then some of the 30- and 40-somethings moving around within the state as well.

Another implication of these demographic shifts can be seen in the housing market, and homeownership demand in particular. Homeownership rates more than double from one’s mid-20s to their mid-30s. And in Oregon, 40% of 31 year olds — the single largest age in the state — own their own home. This demographic demand will strengthen and in the years ahead also shift into the move-up buyer markets as early 40s is when households spend the largest share of their income on housing. These demographic trends were the underpinnings of our office’s Peak Renter work back in 2015, and the basis for our predictions for the 2020s. Now, of course the demand side for housing is not the problem today, it’s the supply side in terms of record low inventories and slower completion rates due to supply chain issues. Some additional resale supply will come on to the market as Baby Boomers age, although that won’t really be until near the end of the decade and more in the 2030s. 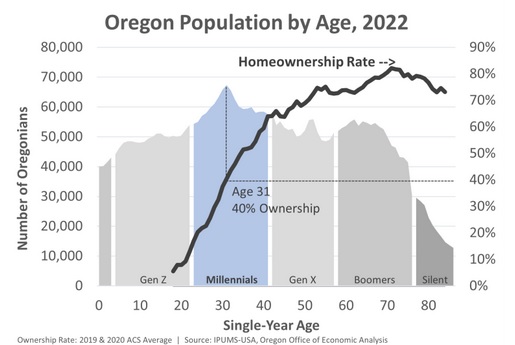 Bottom Line: Demographics matter. In Oregon’s case we now have a higher death rate than birth rate. Our underlying economic growth tends to be faster than the nation due to stronger migration trends, particularly among working-age households. Looking forward, demographics point toward a tight labor market and a strong homeownership market, among others. Millennials are the largest cohort today and our office’s estimates are Gen Z will be the second largest cohort beginning next year in 2023. However the broader economic impacts of Gen Z probably won’t truly be felt until Dua Lipa and Olivia Rodrigo are playing a nostalgic halftime show at Super Bowl LXXV in 2041. 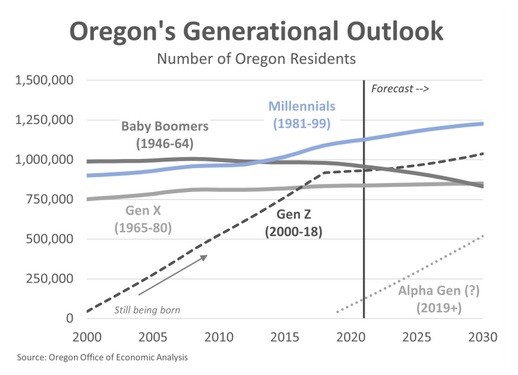