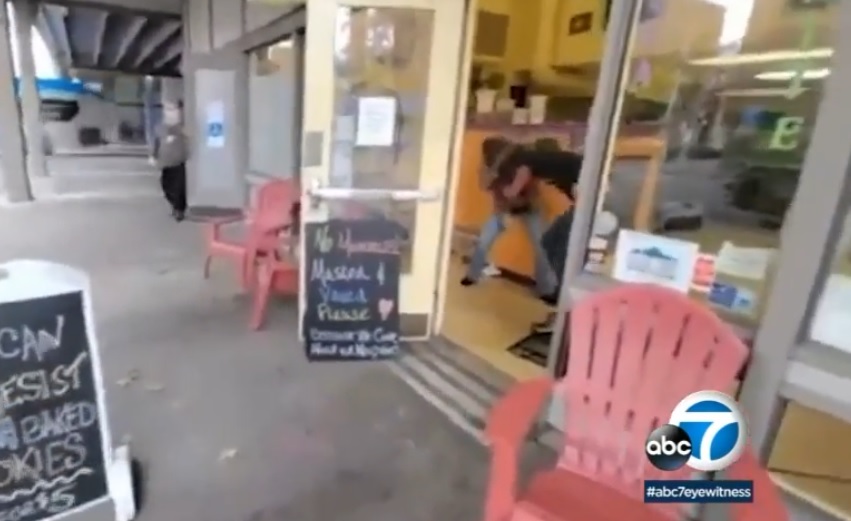 Throughout 2021, Oregon kept up restrictions when most states went back to normal.  As state agencies make the rules, it is small businesses that are forced to implement it and take the backlash from upset customers who feel they have had enough.

For instance, a couple who entered a downtown Eugene bakery without masks while filming what became a physical altercation found themselves arrested by police officers. Scott Collin and Amy Hall allegedly sought an altercation over mask rules by entering the shop, where the masked owner refused to serve them because they didn’t wear face coverings, according to ABC-7. After Hall then shoved her, the owner retrieved a baseball bat. A fight ensued, and when they couple left the Crumb Together cookie shop, they saw police officers and showed them the video, claiming they had been attacked. The officers arrested Collin and Hall for assault. The video has gone viral on social media, generating nationwide support for the bakery owner.

Here are some examples from 2021 on altercations between business and customers:

PDX Eater reported that a Fred Meyer’s in Happy Valley;“Kasper says customers have come behind the deli counter and refused to leave, asked him to take his mask off so they could hear him better, and removed their own masks to eat food in the store. The collective weight of frequent incidents and disrespect has left Kasper “legitimately frightened” in his own workplace, he says. “I don’t want to get my ass kicked in the parking lot.”

KGW-TV 8 reported “I don’t want to tell you guys what to think, what to do, what to believe, anything like that,” the store manager says in the video. “I would ask kindly that you guys understand here at TJ’s we are just trying to work, make a living. The difference you are trying to make isn’t going to be made with us, it can be made with the government.” The anti-mask demonstrators continue to try to walk into the store and are stopped, as more store representatives block the entrance and tell those gathered they must wear a mask to enter, the video shows.  The back and forth exchange has more than 390,000 views on Instagram and and more than 6.8 million views on Twitter.”

KTVZ reported from a doughnut shop in Bend, “Lowery said the man left the store to get what she assumed was a mask. However, he then came back with his sleeve over his face. Lowery explained that wasn’t good enough, and the man could use the drive-thru if he was truly opposed or had a medical issue preventing him from wearing a mask. Then she says, it got ugly.”  … He used some vulgar language about me leaving the store,” Lowery recalled.”

Former Oregon Governor John Kitzhaber wrote an article for the Oregonian stating how some in rural Oregon are ignoring the rules altogether, “In the grocery store, I saw stressed and overworked clerks, struggling to be upbeat and welcoming to their customers. I encountered people without masks, many of whom looked haggard, weary, worn down by life—concerned with how they were going get through the month, pay the rent and feed their families. People just trying to get by, just trying to survive.”

These stories remind us that our leaders may create the restrictions, but it is small businesses that are being asked to implement it and face the public pressure against them.   These small businesses are rarely ever asked their opinion when it comes to creating these rules.