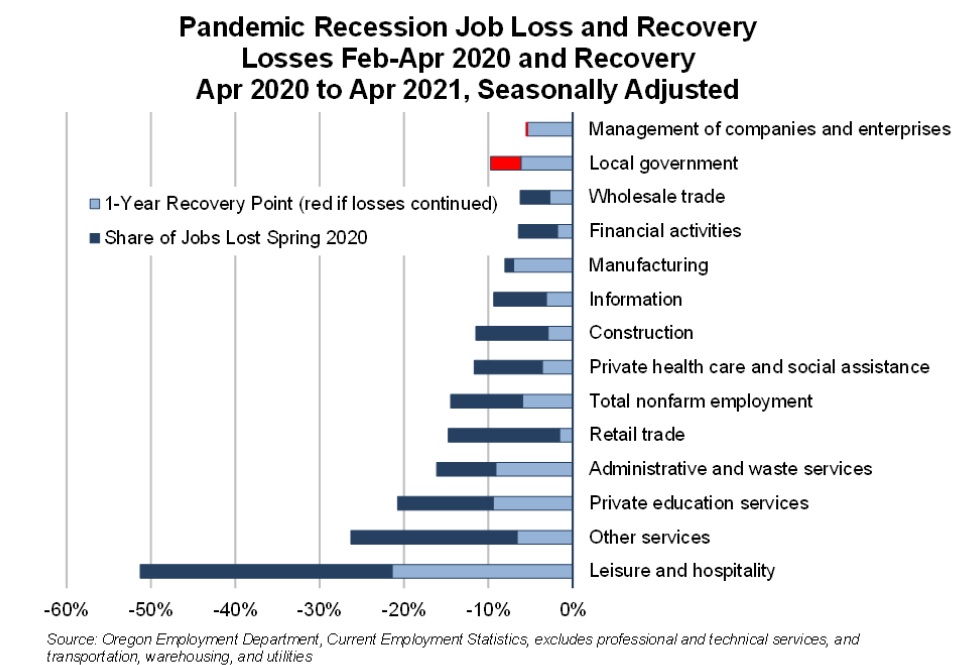 Disparate Impacts of the Pandemic Recession in Oregon
By Oregon Employment Department,

The pandemic recession came upon a healthy economy with record high total employment and a record-low unemployment rate in spring 2020. Within two months’ time, Oregon lost 286,000 jobs and unemployment spiked to an all-time high of 13.2%. Job losses were not distributed evenly, affecting some industries and workers to a greater degree. These disparate employment impacts are detailed in a new report released by the Employment Department today. (Check out the podcast version too!)

By industry, three service-related sectors bore the brunt of the pandemic. Leisure and hospitality was impacted the most by far – losing half of its employment, or about 110,000 jobs between February and April 2020. The other hardest-hit sectors initially were other services – things like barber shops and hair salons, tattoo parlors – and also the education sector.

Leisure and hospitality in particular employed more women, more of Oregon’s young workers, and more Black, Indigenous, and workers from communities of color than Oregon’s economy overall. Other hard-hit sectors also tended to have more women and more low-wage workers. These are the Oregonians who experienced disparate job impacts of the pandemic recession in 2020.

These impacts are reflected in changes in unemployment claims activity during the pandemic. Regular unemployment (UI) claims activity rose dramatically across all demographics in Oregon. That said, the volume increased to an even greater degree for women and for younger workers. 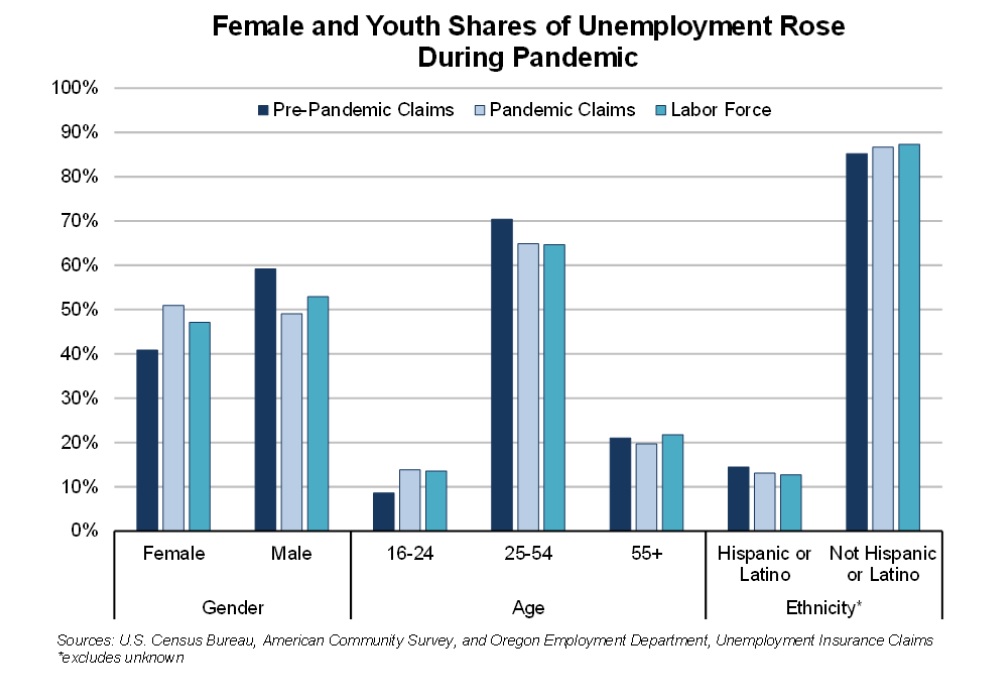 Although workers of Hispanic or Latino origin were more likely to be working in leisure and hospitality than other sectors, their claims volume did not increase to a greater degree than for non-Hispanic workers. There’s a combination of possible reasons: it could be Hispanic or Latino workers were less likely to be laid off, or that they were laid off but less likely to seek unemployment benefits, or possibly did seek benefits but had some difficulty accessing them. It’s also noteworthy that their over-representation in leisure and hospitality was not as pronounced as for all young workers (who made up 27% of sector employment), or women’s in education (where they held two out of three jobs).

The focus of any economic downturn often falls first on those who lost their livelihoods. The pandemic recession also created disease exposure risks to those who remained working at in-person or high-contact jobs. Much like those who were more likely to suffer pandemic-related job losses, data suggest that lower-wage earners, younger workers, and workers from communities of color who remained employed appear to have had relatively less opportunity to telecommute. This creates another disparate impact of the pandemic on the workforce.

More information about the disparate job impacts of the pandemic recession can be found in the full report.