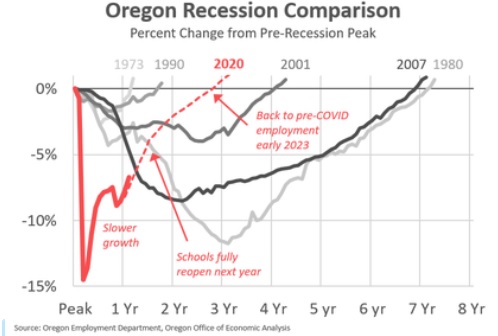 The Oregon Employment Department released the March 2021 jobs report. Overall the new data shows what we are expecting is the beginning of a robust recovery. Last month Oregon saw more than 20,000 jobs added. Most of the gains were in Leisure and Hospitality as the economy continued to reopen and Oregonians returned to bars and restaurants in much greater numbers. Since the depths of the dark winter when cases surged and more restrictive health measures were re-implemented, Oregon has added more than 40,000 jobs. Overall these gains, while expected, are a little bit stronger than the forecast we released at that time.

All told, the latest report continues the encouraging news even as there is a long way to go. Today only 54% of the recessionary lost jobs have been recovered. Even with a strong recovery expected, it will take some time before we fully regain all of the lost jobs. The COVID recession was, and is that deep.

While we are in the midst of a smaller, 4th wave of the pandemic, the overall economy continues to reopen and recover. As vaccinations ramp up, consumers are returning to going out to eat, getting their hair cut and the like in greater numbers. As such, now is as good a time as any to do a quick check on how Oregon is faring economically compared to the nation.

In the big picture, Oregon’s economy is faring about the same as the U.S. as a whole, albeit with a little more severe job losses and possibly a similar lag in overall wages. I bring this up in part because there was another random internet listicle the other day that got some traction as it said Oregon had one of the top performing economies. Given the actual data at hand, I’m not sure how anyone could conclude that. Oregon is right in the middle of the pack of states when it comes to employment, income, and public revenues in the past year. Note that this is actually better than our usual position near the bottom of the pack in terms of recession severity.

This next graph lifts the hood a little bit and decomposes the 1.2% employment gap between Oregon and the U.S. based on the new March data. The chart shows sector differences but weighted by the size of the sectors as well. Adding up all the weighted differences gets you to the total 1.2% difference.

In short, Oregon’s employment is a bit lower than the nation’s due to the pandemic and more restrictive health measures. Employment in local bars and restaurants is down more here than in many states, and given Oregon school’s are not full-time in-person, unlike some other states, that means public employment is down further as well (substitute teachers mostly). As the economy reopens and the pandemic wanes due to rising vaccinations, these gaps are expected to close in the year ahead.

On the flipside, Oregon has seen stronger growth in e-commerce related sectors than much of the country. Jobs in transportation and warehousing have been particularly strong.

Finally, I mentioned there is the possibility of a lag in Oregon wages compared the nation but we are getting some conflicting data there. Right now two measures our office follows closely show a strong rebound in wages in recent months. However the BEA state income data for wages (red line) does not, or at least not in terms of year-over-year growth rates. In fact the latest BEA data release also included a little bit of a downward revision to Oregon wages for 2020. Now, normally these measures all move together. In fact the QCEW data, which comes from actual unemployment insurance records, is the major input into the BEA data. Usually when there are discrepancies like this, over time revisions to the BEA data bring those estimates more closely in line with the QCEW and withholding numbers. Our office expects something similar to occur this time as well.

All told, Oregon’s economy is rebounding strongly in recent months. We expect this pattern to continue over the rest of the year. Our office is currently working on our next forecast which will be released on Wednesday May 19th.