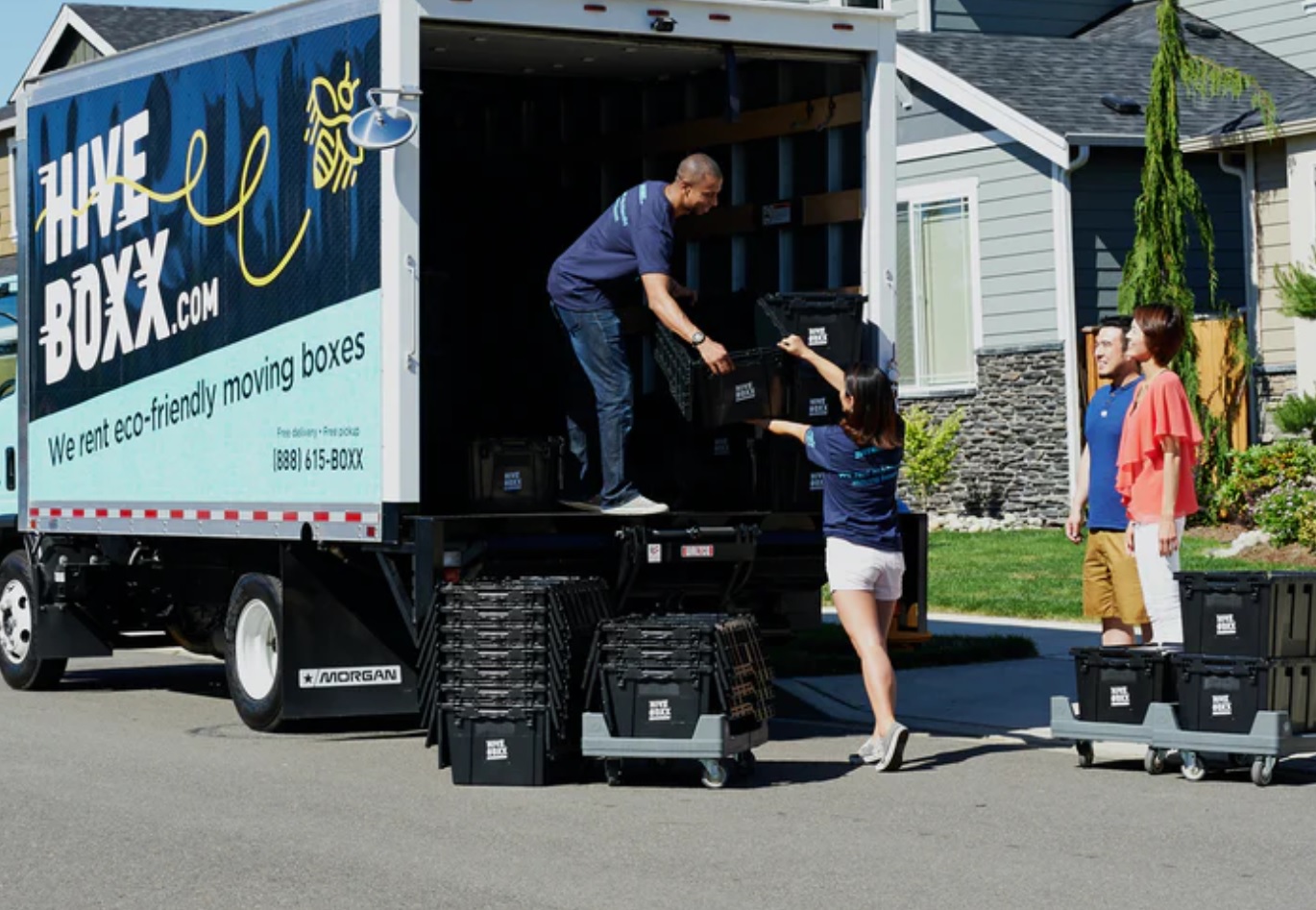 There continues to be a robust discussion around pandemic migration and working from home. Following our office’s most recent forecast for population growth, in addition to our updated report on Working from Home and new outlook for housing, I wanted to circle back and flesh out a few things.

First, a confession. I am basically on the record being a wet blanket to many of these discussions. I am also on the record saying I believe these are all upside risks and I hope I am wrong. One reason is that we rarely see massive shifts in things like population growth, particularly boosts to migration during recessions. The 1990 recession being the only prominent example in Oregon.

A second reason is that good, solid data remains a long ways off. All discussions to date are speculative. We won’t get 2020 ACS data until late September 2021, more than 13 months from today. We won’t get 2020 Oregon population estimates from Portland State until November 2021, some 15 months away. And this is to say nothing of the official 2020 Census numbers which serve as a key anchoring point to all of our demographic discussions. We don’t know how they will turn out given the pandemic and the, shall we say, lackluster administrative support. But between now and when we get good data, we will be scouring around for all relevant data. Please pass along anything you find useful! That said, we know most of the available data paints an incomplete picture at best. It will take a host of data points to try and fill in the gaps.

With that said, let’s take a couple looks at home sales. A lot of discussions point toward strong sales as an indicator of pandemic migration. No question home sales are a measure of housing demand and tend to be pro-cyclical, just like migration. But simply saying home sales are up isn’t quite the same thing as saying population growth is accelerating, which is really what a lot of the discussions I find myself in are actually trying to say. That may be the case. We just don’t know.

The key here is that migration generally slows in recessions. People follow the jobs. As job opportunities dry up, folks stop moving. So any pandemic migration would need to be strong enough to offset this normal cyclical pattern to show that 2020 population growth was faster than 2019. To our office, that seems like a heavy lift.

Specifically I am now tracking a few things. Send me your suggestions (and better yet any data sources) for additional items to track. The first is trying to parse out the city vs suburbs debate about people fleeing cities in search of more space to avoid the virus. As City Observatory has detailed, to date there is no indication this is happening. In the Portland region, home sales do not yet indicate a shift in preferences for the City of Portland versus the suburbs. 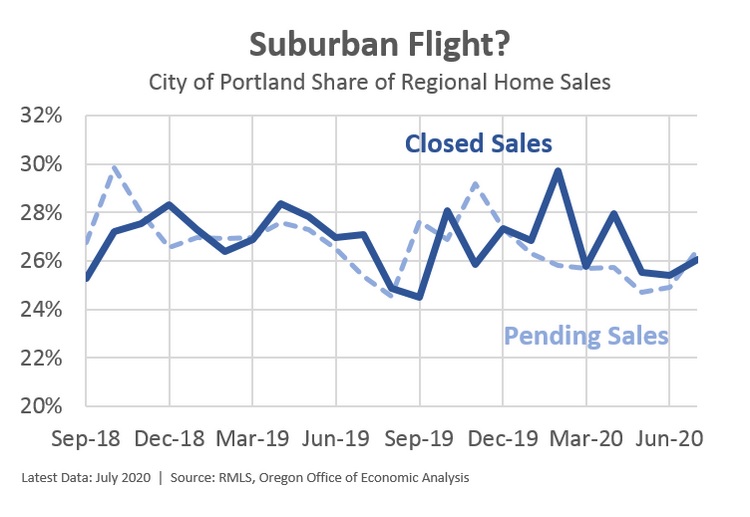 The second thing I’m tracking are home sales in a few popular, scenic areas. Bloomberg’s Conor Sen has a good article on remote work and housing in so-called “Zoom Towns.” Potentially this could be an indication of pandemic migration to smaller metros and/or rural areas. So far in the housing data we know that home sales have been strong in recent months. The key question is how much of the strength is simply making up for the weak spring when we were sheltering in place. 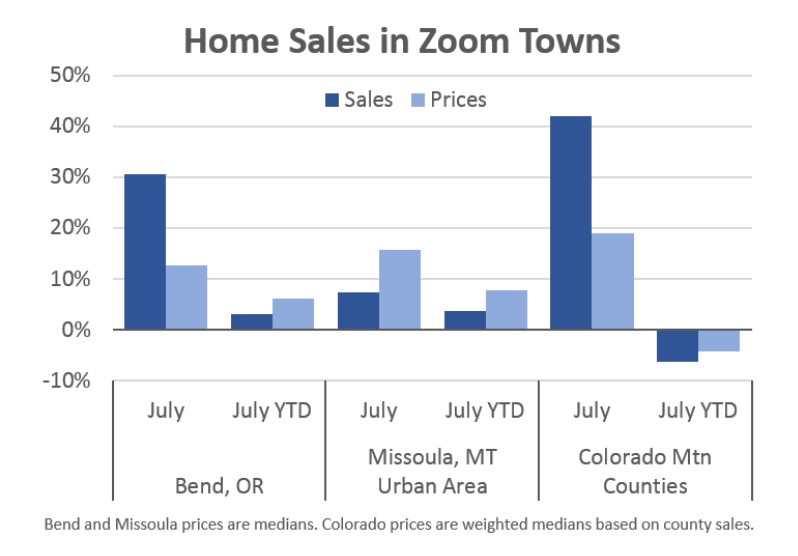 The year-to-date (YTD) numbers are solid, but not yet spectacular, in Bend and Missoula. In fact home prices are up ~6% in Bend and ~8% in Missoula, which is right in line with appreciation in 2018 and 2019. Given the very low inventory levels, I would expect these prices to continue to rise, but I am more interested in the number of sales over the course of the remainder of the year. Will they level off and show solid gains when the dust settles, or will they increase considerably due to pandemic migration?

Finally, I wanted to follow-up on some of the working from home discussions. I would recommend this Brynjolfsson et al paper, plus further research from Adam Ozimek at Upwork on the future of remote work, and Derek Thompson in The Atlantic on future workforce changes and their implications. Overall there is possibly a much larger change underfoot than many expect, myself included.

Adam’s report shows that businesses are finding remote work to largely be going better than expected and future expectations of telecommuting to increase. As such I thought it might be useful to take some of the new research and adjust it to the standard Census data we have. We know that the Census data is an undercount as some remote workers do so from co-working spaces, coffee shops and the like, plus a number of folks telecommute one or two days a week. Even so, doing a very rough projection based on the historical Census data and the new surveys yields something like the following. As out office noted the other week, remote work and working from home more broadly is a long-run growth opportunity, possibly an even more significant one than we expect. 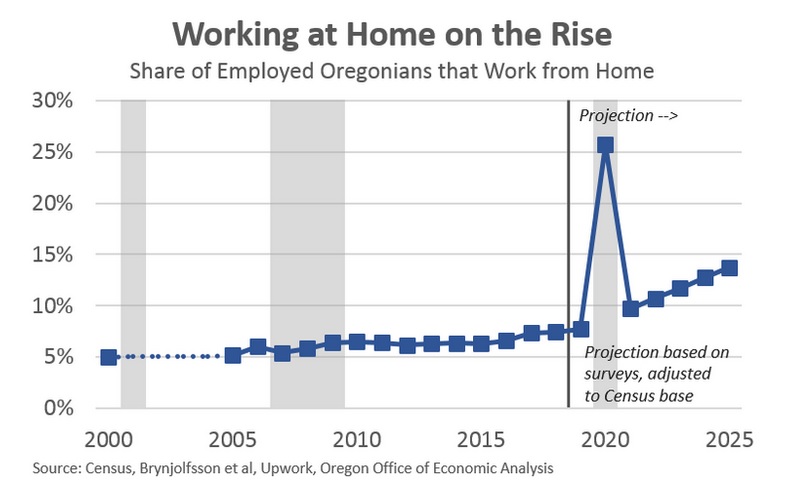 These are important discussions to have and important topics to follow. Even as it will take some time before the good, solid data is available, our office will continue to track what information is available.