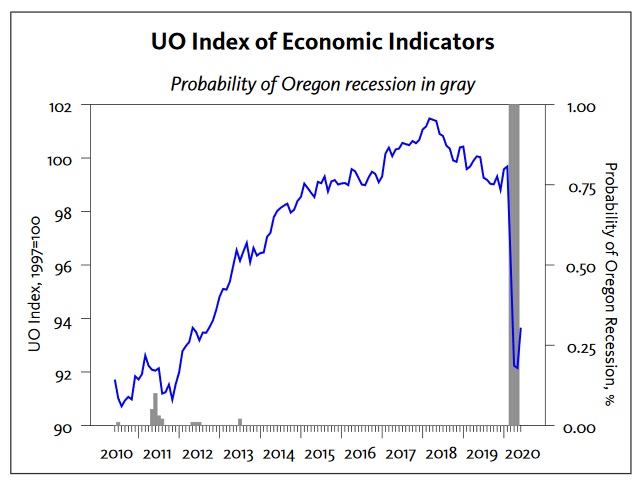 By University of Oregon Economic Indicators

This is the University of Oregon State of Oregon Economic Indicators for June 2020. The release date is August 4, 2020. Special thanks to our sponsor, KeyBank.

The Oregon Measure of Economic Activity rose in June to 0.41 from a downwardly revised -0.23 in May. Despite the gain over the past two months, the moving average measure, which smooths out the volatility, stands at -4.56, mired deep below average growth for the Oregon economy (0.0 on this scale). Highlights of the report include:

– Like last month, the improvement is predominantly attributable to employment gains that supported neutral or positive contributions from all sectors but households. High unemployment, high levels of initial jobless claims and weak consumer sentiment weigh heavily on the household sector.

– The University of Oregon Index of Economic Indicators gained 1.6% in June, the first increase since February.

– Falling (though still high) jobless claims, rising hours in manufacturing, and a gain in orders for core manufactured capital goods all helped support the UO Index this month.

– The data reveal the unusual nature of this recession. Two indicators that traditionally fall during recessions, housing permits and the Oregon Weight-Distance tax (a measure of trucking activity) remain steady. Similarly, core capital goods orders have not fallen as much as might have been expected.

– The pattern of the data is consistent with a primarily consumer-led recession where demand for nondurable services such as leisure and hospitality are impacted more heavily than demand for goods.

While the initial phase of firm re-openings supported the economy in May and June, the road ahead is more difficult. A rise in Covid-19 cases both statewide and nationally prevents a full-reopening of the economy. Moreover, layoffs continue at an elevated pace and high-frequency data from the Census indicate that employment might fall in July while Congress has yet to pass a continuation of now-expired enhanced unemployment benefits. Until the pandemic is contained, expect a slow and choppy recovery.