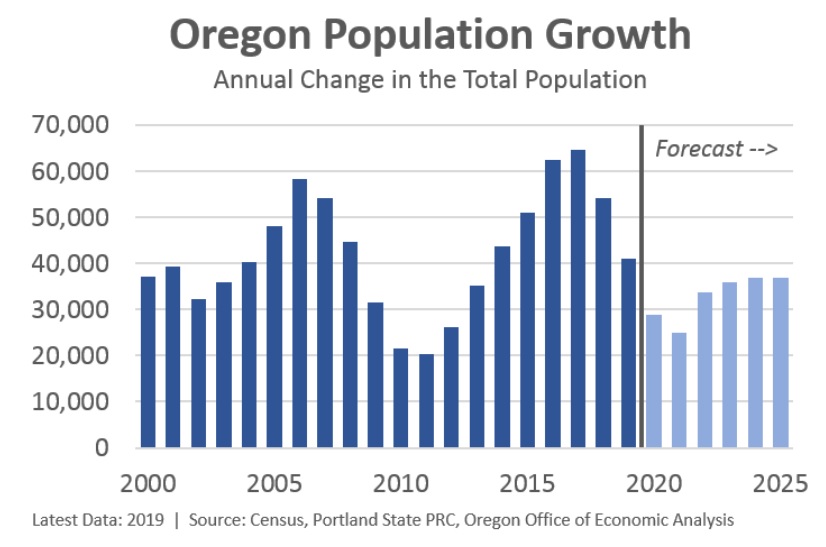 In terms of the economy, the biggest risk is the amount of permanent damage that accumulates during the social distancing phase. Across the country this is largely about business closures and/or permanent layoffs. In terms of a more Oregon-specific risk, one item our office is watching closely is migration. While growth for growth’s sake is not necessarily a good policy goal, the real benefits of migration for Oregon isn’t just the increase in demand for local pizza shops, but rather the ample supply of mostly young, skilled workers for local businesses to hire and expand. Remember, long-run economic growth is all about the number of workers and how productive each worker is.

While people pack up and move to Oregon in good times and bad, we know most people follow the jobs. Migration flows are considerably larger when job opportunities are plentiful. As such, the recession is expected to change both the annual pattern of migration to Oregon but also the longer-term population forecast. Now, Oregon is still expected to see population growth, however these gains in the next few years are reduced from recent forecasts.

In thinking through the outlook it is helpful to distinguish between the expected impacts at different points along the way.

In the near term, migration is drastically reduced. Hardly anyone is moving during a pandemic and shelter in place style policies are in effect. Provided these policies lift and households are confident enough over the prime summer moving months, the impacts of the shutdown itself may prove minimal. The risk here is that the public health situation deteriorates such that nobody moves this summer, which is not our baseline forecast.

Over the medium term, migration will be reduced due to the recession. Fewer people will move here as job opportunities are harder to come by. Household formation will also be weaker due to income losses and uncertainty. Overall, our forecast for population growth over the next five years is lowered by 36,000 (-0.8%). What this effectively means, at least relative to our previous forecast, is that Oregon will basically lose one year of migration over the next five. Taking into consideration the typical age of migrants and labor force participation rates, this forecast change reduces the potential size of Oregon’s labor force by about 15,000 a few years down the road. In a stronger economy and given demographics, that’s roughly equivalent to 7 or 8 months of job growth. This is no minor change.

Now, over the long term our office does not expect any appreciable differences in the state’s ability to attract and retain working-age households. The combination of available jobs, scenic beauty, and housing affordability that’s bad, but also not the worst along the West Coast are all expected to remain.

Now, the reduced migration from the recession is expected to create persistent damage to the long-run outlook. However once the recession subsides, the damage is not expected to continue to mount or worsen. Migration flows in the second half of the decade are actually raised a few thousand relative to previous forecasts.

This lower population outlook has implications not just for labor force growth and different regions of the state, but also for things like the housing market which we will circle back on in the near future. Additionally, I have been fielding a lot of requests regarding remote workers and how the pandemic may change migration patterns. I am in the process of updating all that information and will share when it’s available.

For more on the population and demographic outlook, see our office’s forecast summary starting on PDF pg 30 here. It touches on fertility rates, age structures, how demographics can impact budgets, and expectations of an additional U.S. House of Representatives seat, among other things.