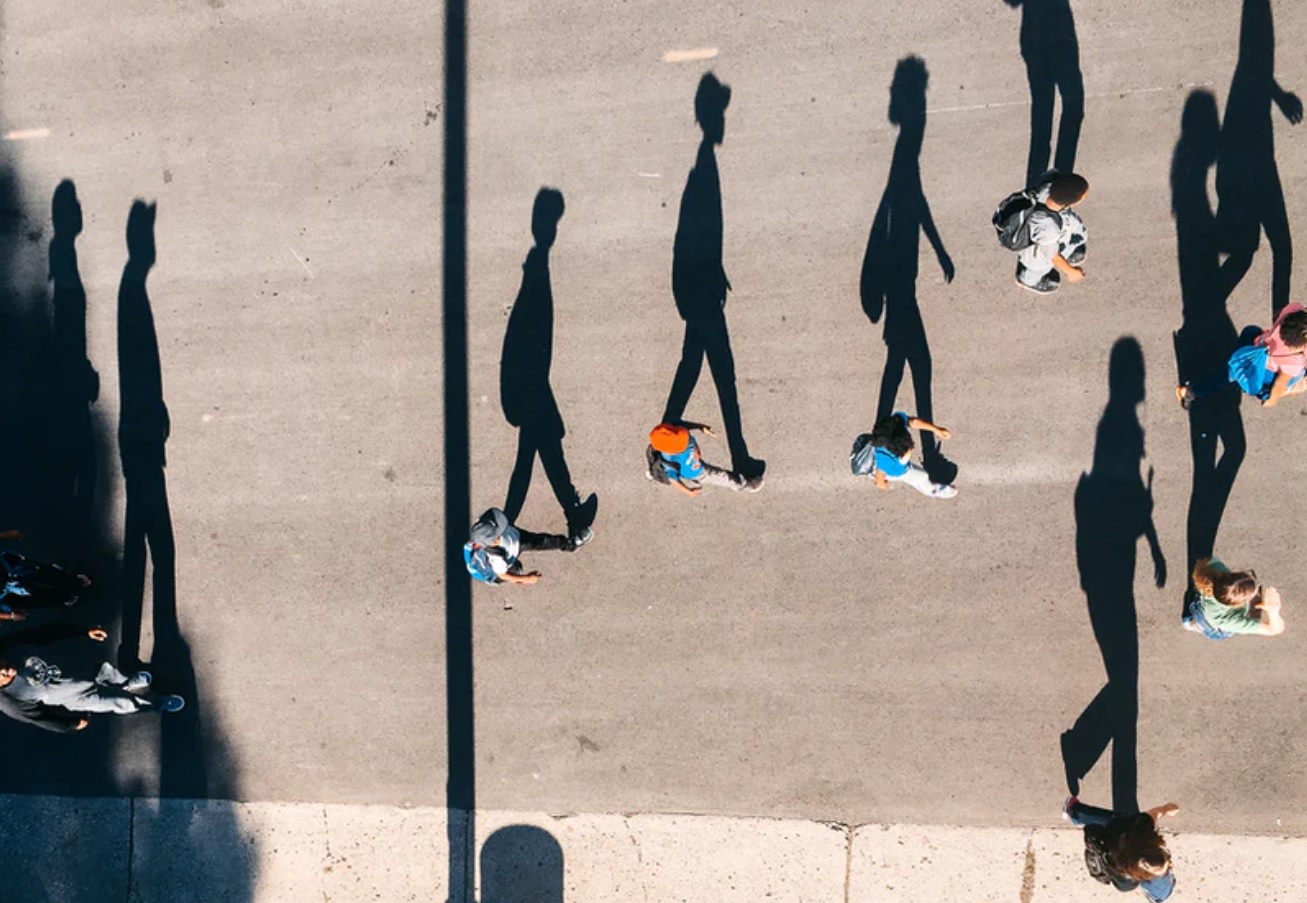 One of the most visible and devastating impacts of the state’s stay-at-home order to protect us from the human health crisis presented by COVID-19 has been mass layoffs. More than 30 million initial claims for unemployment insurance were filed across the nation in the first six weeks of the crisis. Here in Oregon about 362,000 initial claims were received in the first six weeks, roughly 17 percent of the statewide labor force. We now have enough data to start drawing some conclusions about industries, areas, and populations most impacted at the onset of the crisis.

Not surprisingly the most populated counties have the largest number of initial unemployment insurance claims, with Multnomah (52,358 claims) and Washington County (27,520 claims) in the Portland Metro area topping the list of counties with the highest number of claims processed. However, we can see a clearer picture of the hardest hit counties by looking at the number of initial claims as a share of the total labor force. Here we see that counties with large accommodation and food service sectors and tourism destinations were the hardest hit. The number of initial claims processed in both Lincoln and Clatsop counties on the Oregon coast represented more than 17 percent of the labor force. Deschutes County accounted for the highest share of unemployment insurance claims processed of Oregon’s metropolitan counties, accounting for more than 14 percent of the Bend MSA labor force. 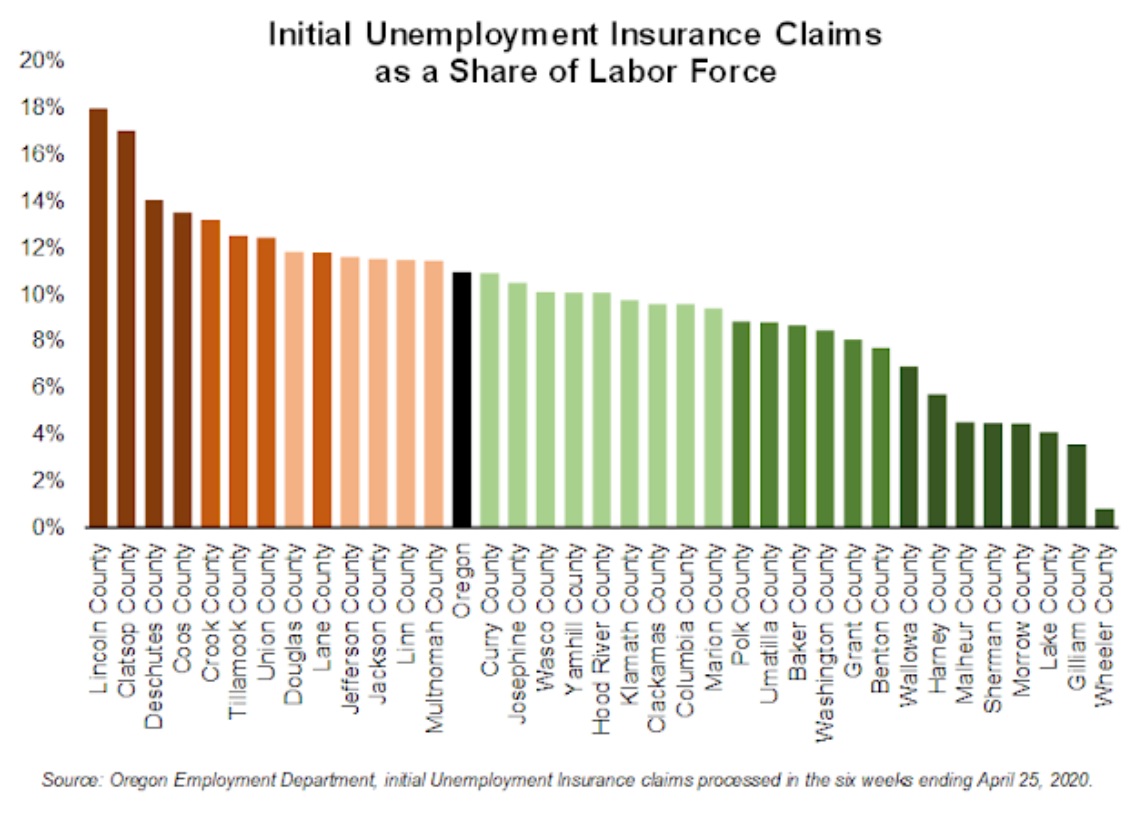 As would be expected, accommodation and food services has been the hardest hit industry during the current crisis, with initial claims processed over the past six weeks representing roughly 32 percent of statewide employment in the industry. Arts, entertainment, and recreation was the next hardest hit as museums, ski resorts, zoos, and other recreation companies have closed or seen their operations significantly curtailed. Another hard hit industry is “other services,” which includes personal care services like fitness instructors, childcare workers, barbers/ stylists, massage therapists, and pet groomers.

Perhaps more surprising has been the large number of initial unemployment insurance claims being processed in construction, health care, and manufacturing. These were industries that on first glance would seem more insulated from the initial COVID-19 restrictions. Health care posting large numbers of layoffs during a health crisis may seem puzzling; however, there are many health-related businesses that are not serving on the front lines of the COVID-19 response such as dentist offices, ambulatory health services, medical labs, and surgery centers. Many elective procedures are being postponed until the health crisis diminishes and there is less strain on the hospital system. Layoffs in construction and manufacturing are likely a result of an inability for many of these businesses to implement effective social distancing requirements. However, as this crisis continues, layoffs are increasingly due to a demand shock from less consumer spending. The one commonality among these hardest hit industries is an inability for many of the jobs to transition to work from home and the design of workplaces that makes social distancing difficult.

The Most Vulnerable Oregonians Are the Most Heavily Impacted 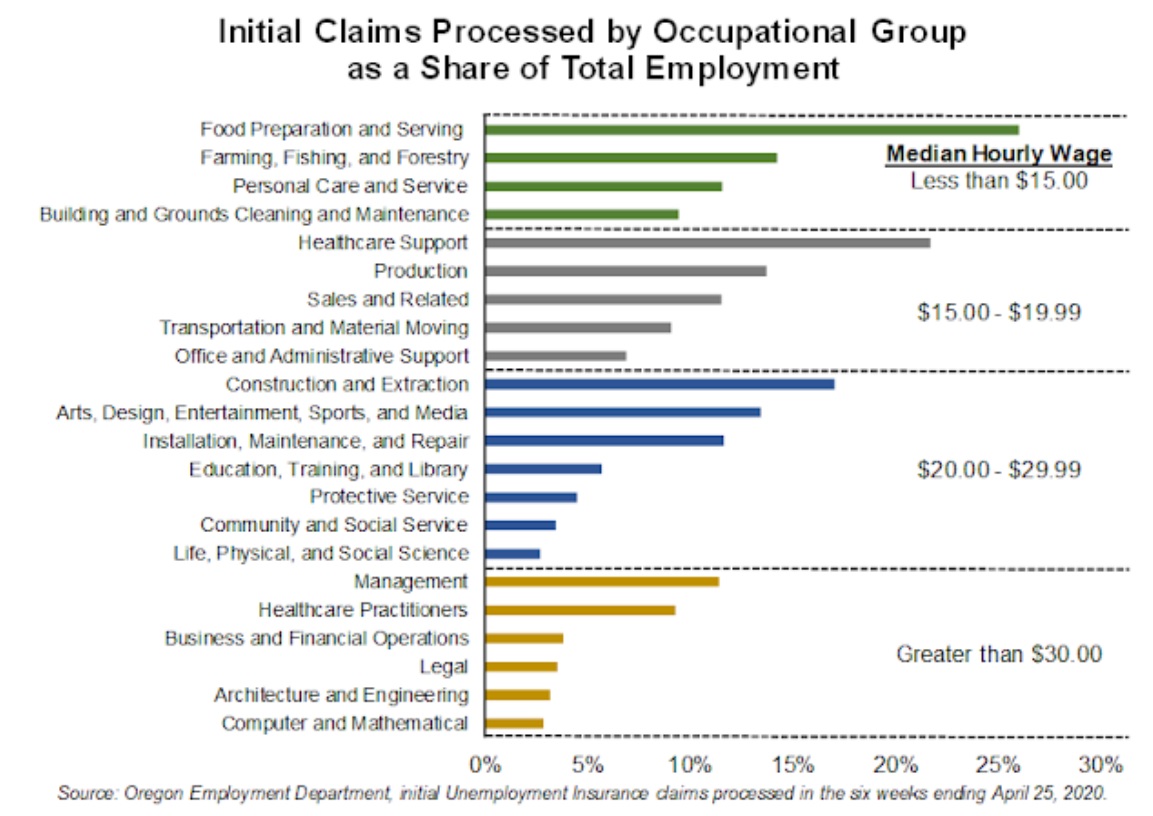 When comparing the level of education for today’s unemployment insurance claimants compared with the educational attainment of the entire labor force, we see that those with lower levels of education have been hit particularly hard. This is likely a reflection of the industries that have been hardest hit, such as leisure and hospitality, construction, retail, and manufacturing that have a higher concentration of workers with a high school diploma or less. Around 58 percent of recent unemployment insurance claims were by individuals with a high school diploma or less, a significantly higher share than the 28 percent of the labor force they account for. 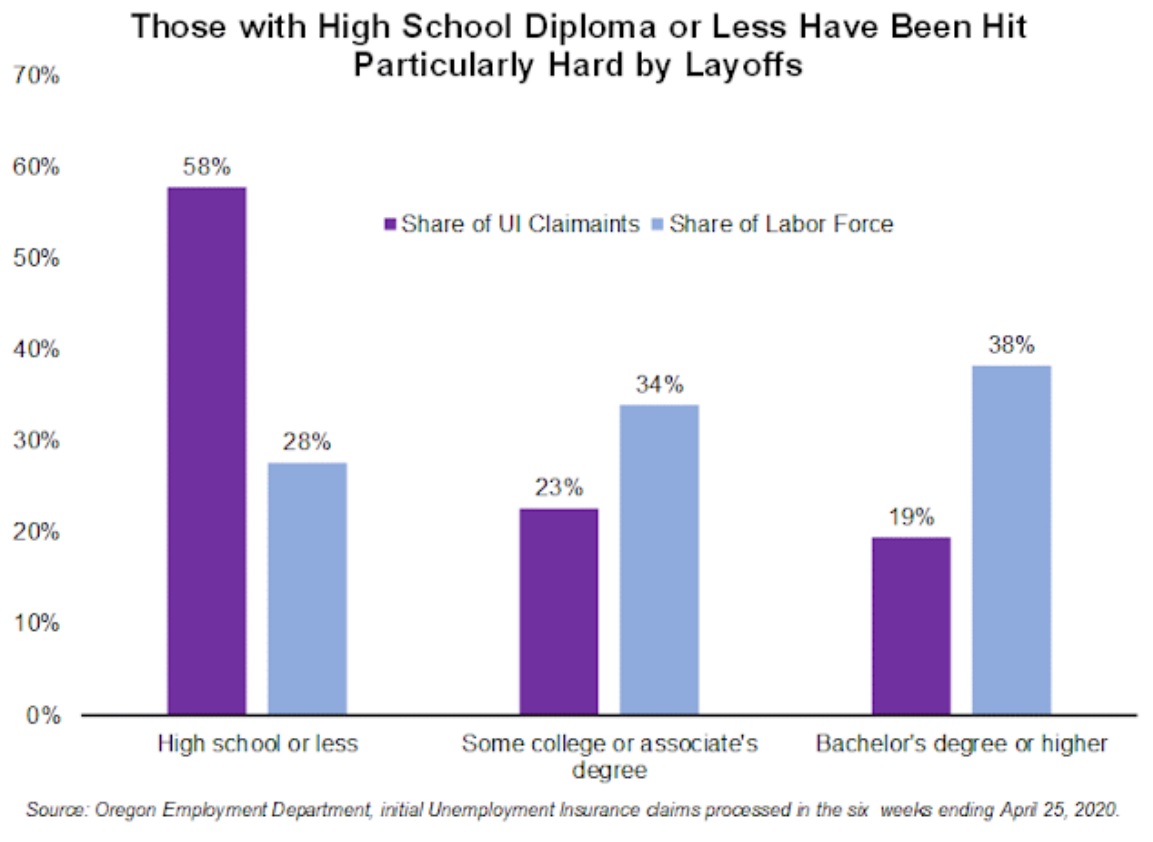 The age distribution of the unemployment insurance claimants is fairly typical of the labor force more broadly, with a few exceptions. Those ages 25 to 34 have been particularly hard hit. They accounted for roughly 29 percent of all unemployment insurance claimants in the past six weeks, but only 23 percent of the total labor force. This age group accounts for a larger share of the jobs in industries that were particularly hard hit. It could also be that this group represents workers earlier in their career and they were more susceptible to layoffs than higher level managers or supervisors. The youngest workers (ages 16 to 19) seem to be the least impacted, accounting for only 2 percent of total claimants. However, this is likely a reflection of lack of unemployment insurance coverage for these young workers who have fewer covered hours in the system.

This is a difficult time for many of us. In addition to the emotional toll this global pandemic is taking, many of our fellow Oregonians are also struggling with the economic realities of becoming unemployed. The Oregon Employment Department is here to serve in this time of need by administering unemployment insurance. Due to the record increase in claims, it is taking longer than usual for claims to be processed. The Unemployment Insurance Division is working as fast as they can to process every claim, and they continue to add staff. They ask that you continue to file weekly and you will be notified when your claim is processed. For additional information about unemployment insurance and updates regarding new federal programs go here.