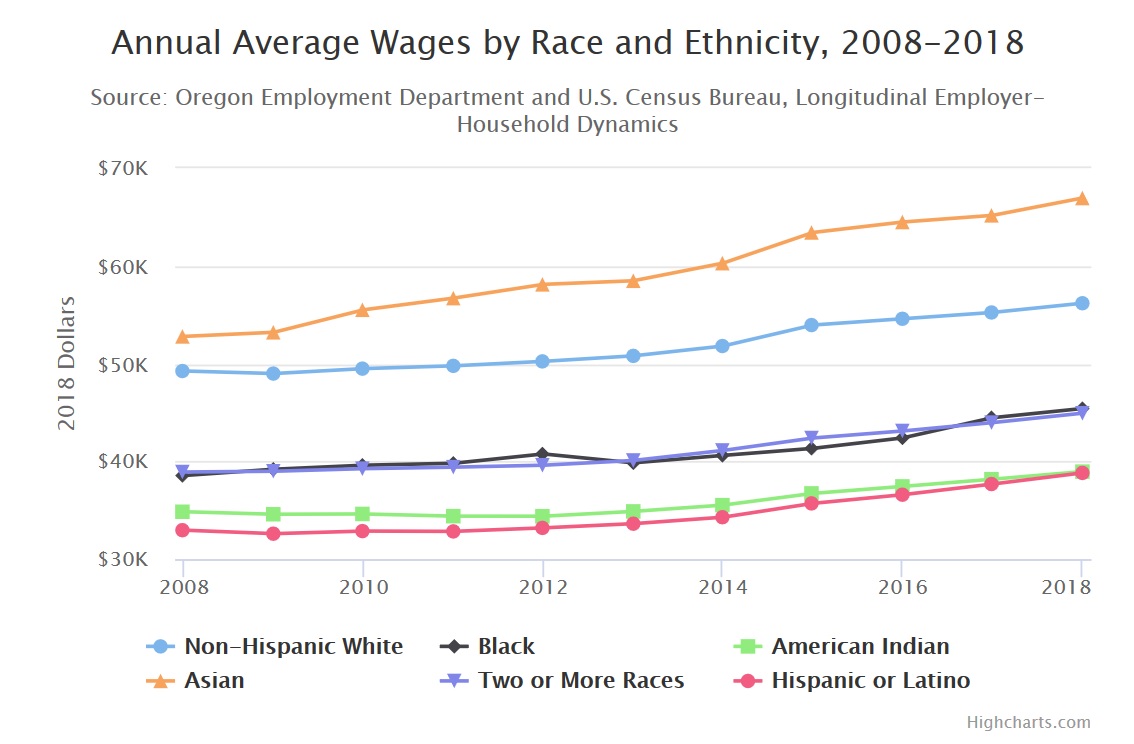 Over the last decade, the wage disparity by race and ethnicity in Oregon has remained consistent. According to the U.S. Census Bureau’s Longitudinal Employer-Household Dynamics (LEHD), Asian and non-Hispanic white workers have the highest wages. In 2018, wages for black, American Indian, mixed-race, and Hispanic or Latino workers of any race ranged between $39,000 and $45,000 annually – at least $10,000 less than white workers and $20,000 less than Asian workers.

However, real wages have grown faster for Hispanic and Latino and black workers than for non-Hispanic white workers. On average, real wages for Oregon workers grew 13.1 percent from 2008 to 2018, an increase of $6,256. American Indian workers have seen the lowest real wage growth of 11.8 percent in the last decade. Real wages for all other racial and ethnic groups grew by at least 14 percent. Asian workers have seen the most real wage growth at 27 percent, an increase of $14,160 in their annual average wages.

Educational attainment is also a factor. The 2018 American Community Survey reported that 36 percent of non-Hispanic whites over 25 have a bachelor’s degree or higher, compared with 27 percent of people of color. However, 51 percent of Asian residents have a bachelor’s degree or higher, the highest of any race or ethnicity. Typically, those with higher education qualify for higher-paying jobs, which also factors into the higher annual average wages for Asian and non-Hispanic white workers.

As Oregon’s population continues to diversify, these patterns may change. Positive changes may depend on increasing access to education for people of color and creating pathways to employment in higher-wage fields.