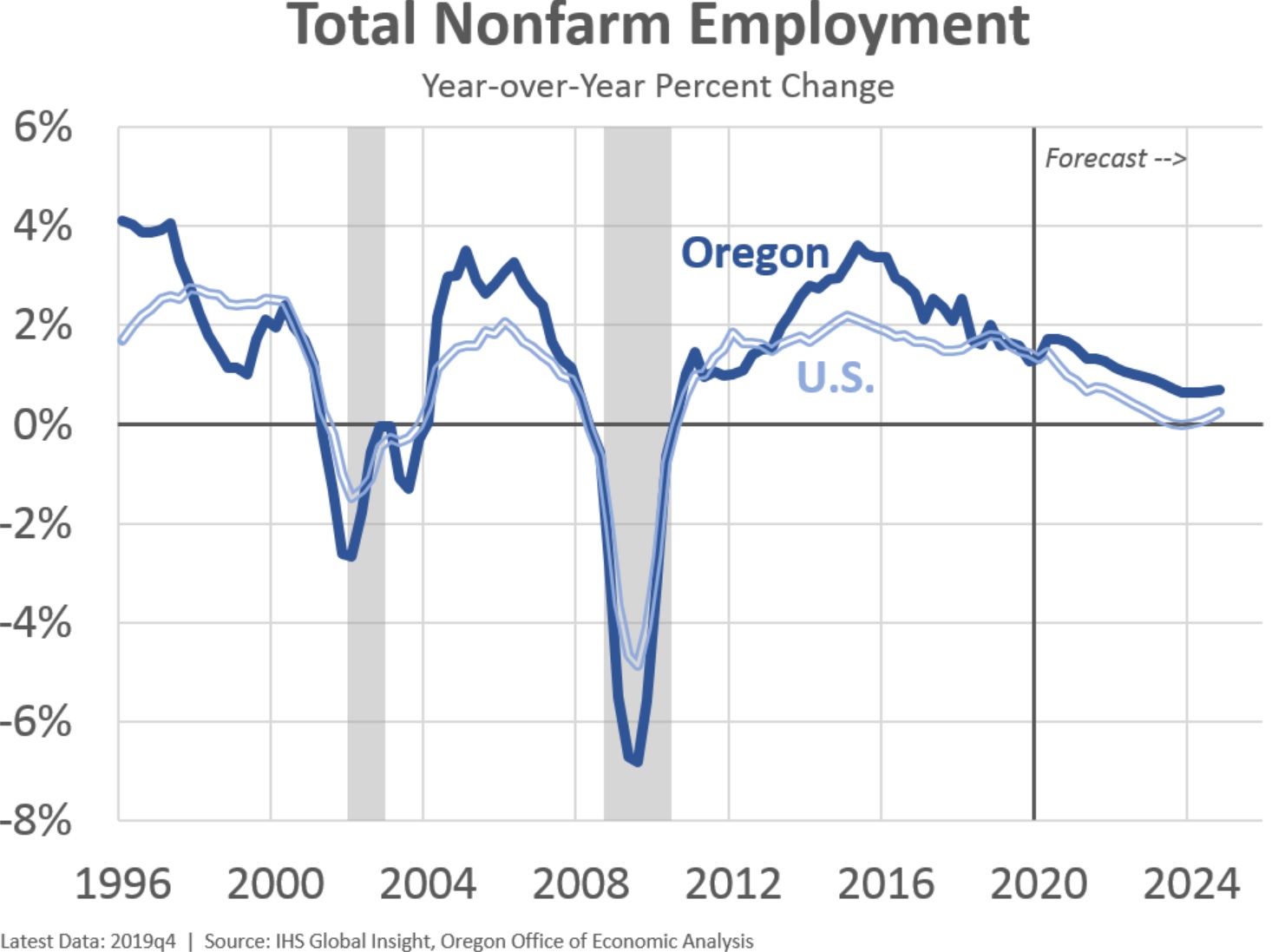 U.S. economic growth has settled in around its potential in recent quarters. The outlook is stable and the risk of recession is receding. The trade war deescalated with the signing of the Phase One trade deal between China and the U.S. and financial markets calmed following the Federal Reserve’s shift in policy.

Local and national strength lies in the labor market where ongoing job gains are more than enough to meet labor force and population gains. Encouragingly the more-plentiful, and better-paying job opportunities are generating a supply side response. Workers continue to come off the sidelines and join the labor force.

One risk to the U.S. and global outlook is the potential human, social, and economic impacts of the coronavirus. Economically the worst case scenario is fears over the virus are a coordinating event that serves as a recession catalyst. Other direct impact channels, however small here in the U.S., include supply chain disruptions, lower volumes of trade, reduced Chinese tourism, and increased financial market uncertainties.

Oregon’s stronger long-run economic growth historically is tied to migration and faster working-age population gains. The primary risk to the local outlook is the available labor supply, particularly as recent population estimates indicate migration is slowing more than expected. To the extent Oregon’s labor force and employment gains no longer outstrip the typical state in a mature expansion, the state must rely more upon its industrial structure and productivity gains to drive faster overall economic growth.

While growth has slowed across many economic indicators, the same cannot be said for Oregon’s primary sources of tax revenue. They continue to outstrip the performance of the underlying economy. The primary forecasting challenge for the current biennium is to determine what portion of the recently strong tax collections is due to temporary factors that will fade away.

Even without the onset of recession, revenue growth is facing major headwinds during the current biennium. State and federal tax policies, a big kicker refund and slower economic growth will all weigh on General Fund revenues in the near term.

The longer the revenue boom persists, the more likely it becomes that permanent factors are playing a significant role in boosting tax collections. As such, revenue estimates for the current biennium have been steadily revised upward over the past two years.

Even so, given that job gains and population growth have both taken a step back, some moderation in state revenue growth is likely going forward. It is also likely that the unprecedented surge in collections that occurred during the last tax filing season was due in part to taxpayers shifting their payments response to federal tax law changes, and other temporary factors.

Together with state and federal tax law changes, the uncertain economic outlook is currently injecting a considerable amount of risk into the revenue forecast. Both April tax filing seasons are yet to come this biennium, leading to a wide range of possible outcomes. Despite this uncertainty, this forecast reflects a relatively stable outlook, with General Fund collections increasing by just over one percentage point.

Fortunately, Oregon is better positioned than ever before to weather a revenue downturn.  Automatic deposits into the Rainy Day Fund and Education Stability Fund have added up over the decade-long economic expansion. Oregon is expected to end the biennium with nearly $3 billion in reserves set aside, nearly 14% of the budget.

See our full website for all the forecast details.