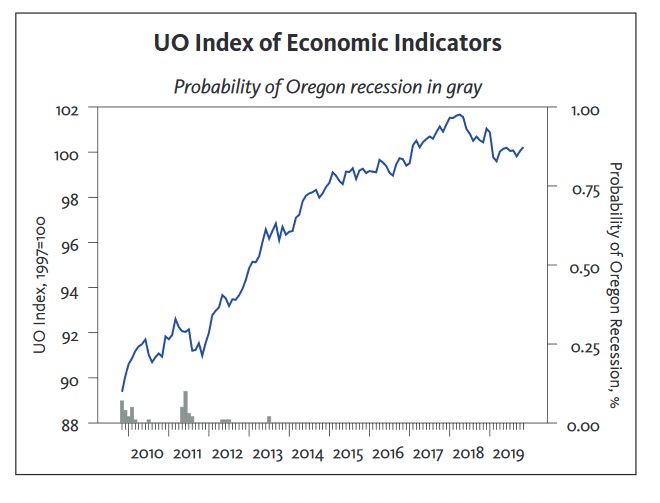 The Oregon Measure of Economic Activity was nearly unchanged in November at 0.63 compared to an upwardly revised 0.58 in October. The University of Oregon Index of Economic Indicators rose 0.2% in November following an identical gain the previous month. Highlights of this month’s report include:

– The manufacturing sector made a nearly neutral contribution as manufacturing employment picked up speed in November; continued job gains in manufacturing suggest the fall in hours-worked in that sector is not related to the economic cycle.
– A drop in the volatile multi-family component of housing permits was a drag on the measure, but this was more than compensated for by an increase in construction employment (which reached a record high in November).
– Falling initial jobless claims supported the UO index; claims have been edging down after climbing slightly last year. Employment services payrolls (mostly temporary help workers) fell but the recent trend remains positive.
– Orders for core capital goods were flat while the Oregon weight distance tax (smoothed), a measure of trucking activity, has been a bit weaker in the past two months after rising to nearly its cycle high in September.
– The spread between long- and short-term rates turned positive as the Federal Reserve cut short-term rates at the end of October for a third time this year. Typically, a positive spread foreshadows continued economic growth.

The combination of measures in this report suggests ongoing economic expansion albeit at a slower pace of growth compared to last year.