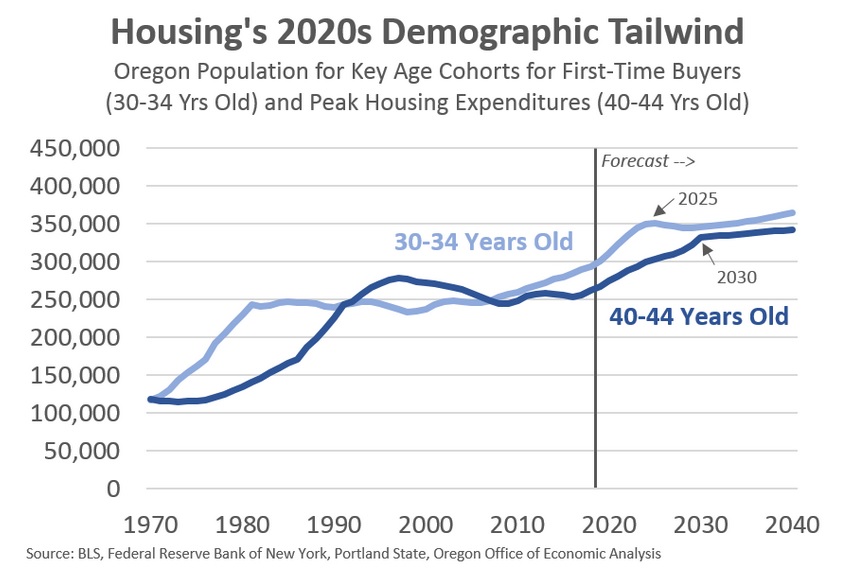 Welcome to a new decade. The 2020s should be the best decade so far in the new millennium, not that the tech bust/housing bubble/Great Recession and its aftermath puts up much of a challenge, but still. While the most remarkable economic trend of the 2010s was the lack of a recession, we know the business cycle will strike again at some point. It is certainly possible we go another decade without an official recession — Oregon did go 20 years without a major hit to state revenues between the early 80s recession and the dotcom bust — but I’m not necessary willing to bet on that today. What I am willing to bet on are two big changes we will see in the decade ahead. These aren’t new changes per se, but the aging of the Baby Boomers and the Millennials into different points in their life cycles will have big economic impacts.

First, at the end of this decade all Millennials will be in their 30s or their 40s. It is much more likely they will have their own kids than be the punching bag about how kids these days don’t walk uphill both ways, or something. But this transition from one’s 20s to their 30s and 40s brings about big shifts in one’s life. In the decade ahead, Millennials will fully transition through their root-setting years. This is when you settle down, begin your career in earnest, get married, have kids, buy a house and the like. And while long-run societal shifts means young adults today are getting married later, having fewer kids and at older ages, these big picture milestones are still common even as single-person households are on the rise.

So what does this mean for the 2020s economy? It means there is a big demographic tailwind for housing, and homeownership in particular. Two key demographics for housing and related industries are first-time homebuyers and young families. Even in today’s housing market, when I’ve dug into the Census data it shows that Oregonians are 50/50 in terms of owners/renters by their mid-30s. As the younger Millennials age into their 30s in the years ahead, this will increase demand for homeownership.

If we step back and look at overall housing-related spending, it peaks in one’s early to mid-40s. This spending isn’t just mortgages and property taxes, but also housekeeping supplies, appliances, furniture and the like. This time period also coincides with many people’s lives when they do have kids living at home, and maybe some even trade up and buy a larger house. People in their 40s also have higher rates of employment and rising incomes at this point in their life cycle, so they spend more money on a lot of categories, housing included. Starting next year, the oldest Millennials will turn 40 and the number of 40-something Oregonians will rise throughout the coming decade. Total housing expenditures should grow faster than the overall economy as well.

The second big shift we will see in the 2020s will be the growth among Americans and Oregonians 75 years and older. We know economically what matters most is that transition from working to retirement. Our office has dug into the potential labor force and number of retirees quite a bit in recent years. However we’re right around peak retirements today. While retirements will remain large in the decade ahead, what will be new, and will reshape the economy will be the growth in the 75+ population. This is why our office is currently working on our new research series, Aging Oregon. Here we will explore the overall demographic trends, improving health, impacts on personal income, tax revenues, housing markets, retirement homes, their workforce needs, and the like. Stay tuned for more as we continue to explore these impacts. 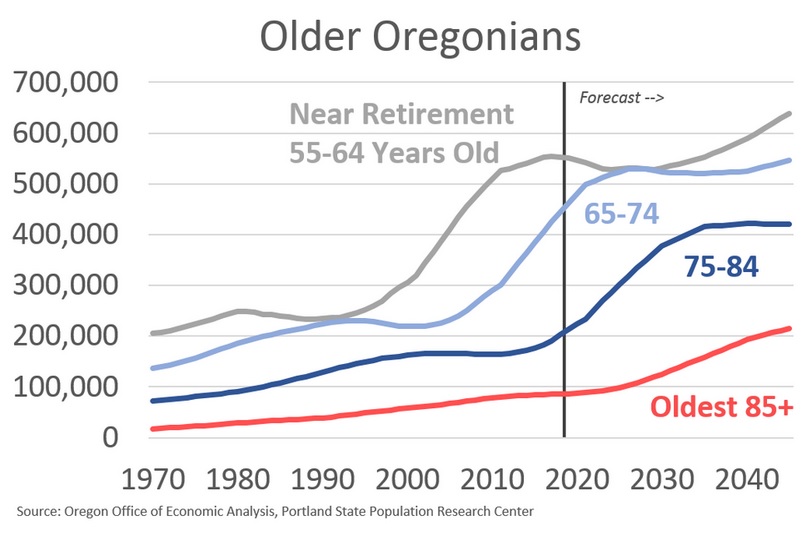 We start the dawn of a new decade on strong economic footing. Rarely has Oregon experienced a better economy. However, we know the business cycle will strike again at some point, even if the outlook remains solid right now.

If we step back and look at what big shifts we are likely to see in the decade ahead, demographics are easy to point out. The aging of Millennials through their root-setting years and Baby Boomers fully into retirement stand out in advance. These transitions will have big, long-run impacts on the economy.

In terms of uncertainty in the decade ahead, the biggest demographic unknown are migration flows. Expectations are that young, skilled households will continue to vote with their feet and move to Oregon, however when compared to births, deaths and the aging of the current population, migration, by far, has the most uncertainty.