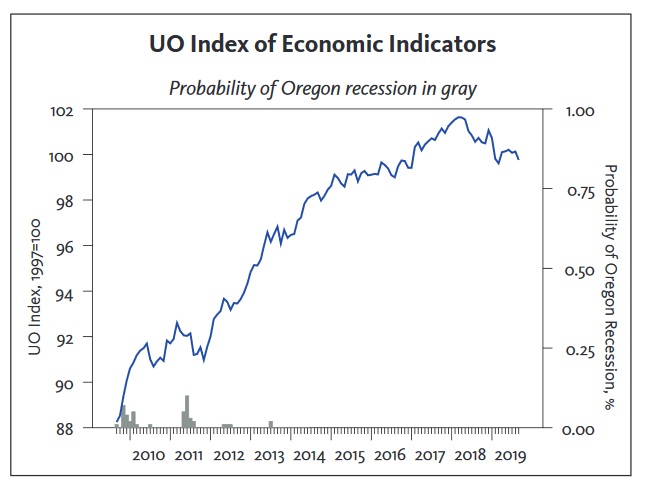 This is the University of Oregon State of Oregon Economic Indicators for September 2019.

The Oregon Measure of Economic Activity rose to o.o4 in September, up from a downwardly revised -0.27 in August. Highlights of this month’s report include:

– The moving average measure, which smooths out the volatility, stands at 0.04, still close to average but lower than typically experienced during an economic expansion (“zero” indicates average growth over the 1990-present period).
– The weakness in the measure stems largely from negative contributions from the manufacturing sector but also unusually soft numbers in the services sector. The manufacturing sector remains under the weight of slower global growth and trade policy uncertainty while low job growth in Oregon drags down the employment-laden services measure into negative territory.
– Employment data may currently understate weakness in the job market; initial unemployment claims remain low and suggest job growth faster than the current data indicates. We may see upward data revisions or, alternatively, employers may be facing labor supply constraints.
– The University of Oregon Index of Economic Indicators fell 0.4% in September. Erratic employment services employment (mostly temporary help workers) was the primary culprit behind the decline.
– On the plus side, firmer hours-worked in manufacturing is supporting the UO Index and the Oregon weight distance tax, measure of trucking activity, rose to a new high. The interest rate spread became less negative as financial markets react to easier monetary policy. A rapid return to a positive spread would greatly reduce the recession signal currently sent by this indicator.

The UO Index does not signal an imminent recession. At this point, the combination of measures in this report suggests ongoing economic expansion albeit at a slower pace of growth compared to last year