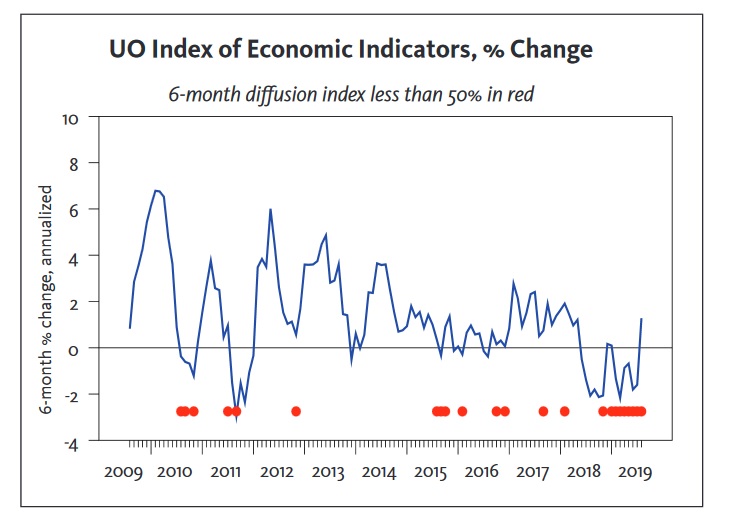 This is the University of Oregon State of Oregon Economic Indicators for August 2019.

The Oregon Measure of Economic Activity fell to -0.07 in August. Highlights of this month’s report include:

The moving average measure, which smooths out the volatility, held at 0.07 (after revisions to previous months), still close to average but lower than typically experienced during an economic expansion (“zero” indicates average growth over the 1990-present period).

– The manufacturing and service sectors both contributed negatively to the measure. Manufacturing suffers from a slump induced by slower global growth and trade disputes. Slower job growth weighs on the services sector components; job growth may be held back by supply constraints as suggested by slower labor force growth.
– The University of Oregon Index of Economic Indicators rose in August; the UO Index gained in four of the last five months.
– Initial unemployment claims fell back while temporary help employment rose; both indicators suggest job growth will remain positive in the months ahead.
– Core manufacturing orders for capital goods and the Oregon weight-distance tax continue to track generally sideways. Residential housing permits and consumer sentiment were a bit softer relative to recent months.
– The difference between long and short-term interest rates deteriorated further; past recessions have followed such “yield curve inversions.”

The UO Index does not yet signal a recession. At this point, the combination of measures in this report suggests continued economic expansion albeit at a slower pace of growth compared to last year.

Special thanks to our sponsor, KeyBank.