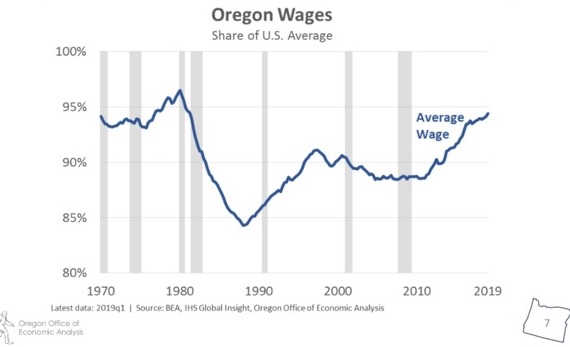 The current expansion is now the longest on record, celebrating its tenth birthday over the summer. The economic data flow remains solid overall and classic recession catalysts like an overheating economy are not rearing their heads. The good news is that expansion do not die of old age and the outlook calls for ongoing growth. However, expansion do tend to die due to bad behavior and policy mistakes. As such, the risk of recession is clearly rising in recent months. Revisions to both GDP and employment reveal a weaker and slower-growing economy than previously believed. The trade war escalation is spilling over and weighing on the economy to a larger degree as well. Businesses are wary as they delay investments and slow their pace of hiring. All of this has financial markets on edge and the Federal Reserve taking out insurance rate cuts in hopes of heading off a recession. Time will tell whether this is the top of the cycle or just a rough patch.

Oregon continues to see healthy rates of economic growth, however the state is no longer outpacing the rest of the country to the same degree as earlier in the expansion. The state is not immune to national and international developments. While topline manufacturing indicators in the state look good, cracks may be forming due to the trade war. All told, Oregon continues to hit the sweet spot for now. Growth is strong enough to keep up with an increasing population and deliver economic and income gains to Oregonians. The share of working-age residents with a job is higher than the average state and both wages and overall household incomes continue to rise at a faster rate. 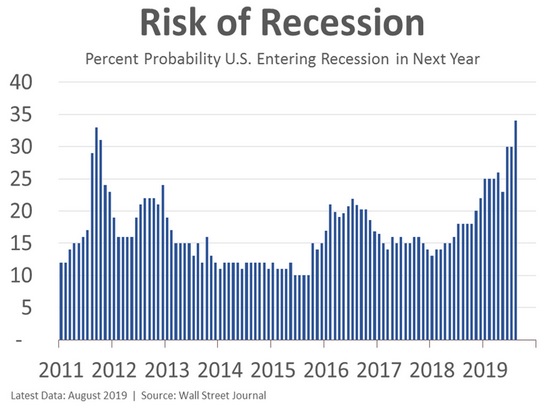 During odd-numbered years, Oregon’s September revenue forecast provides a look back at the biennium that just came to a close. Unlike the nationwide economic expansion, Oregon’s revenue picture has yet to show any cracks. Through the end of the 2017-19 biennium, all major types of Oregon’s General Fund tax collections continued to outstrip gains in the underlying economy.

The strong growth at the end of the biennium resulted in an increased estimate of the kicker refund. The personal income tax kicker is now expected to be $1.57 billion, making it the third largest as a share of liability on record. Kickers of this size occur about once every decade, typically around the peak of the business cycle. As was the case with the large kicker generated during the mid-1980’s, changes in federal tax policy played a large role in generating above-trend state collections last biennium.

All told, the September forecast reflects a stable economic outlook, with the expected size of General Fund collections increasing slightly over what was expected at the Close of Session. Total available resources have increased around $300 million, largely due to a bigger beginning balance carryforward.

However, when tax policy changes from the 2019 legislative session are factored in, the General Fund is expected to be significantly smaller over the forecast horizon than what was expected in May. Most notably, the enactment of a Corporate Activity Tax (HB3427) brought with it personal tax rate cuts, and is expected to reduce business tax liability. While the Corporate Activity Tax will clearly be a net positive for the state budget as a whole, it will reduce General Fund resources since the new collections will not be deposited there.

Heading into the new biennium, uncertainty about the performance of the nationwide economy has become paramount. Growth will certainly slow to a sustainable rate in the coming years, but the path taken to get there is unknown. Fortunately, Oregon is better positioned than ever before to weather a revenue downturn. Automatic deposits into the Rainy Day Fund and Education Stability Fund have added up over the decade-long economic expansion. When the expected ending balance for the current biennium is included, Oregon has more than $2.5 billion in reserves set aside, amounting to more than 12% of the two-year budget.

See our full website for all the forecast details. 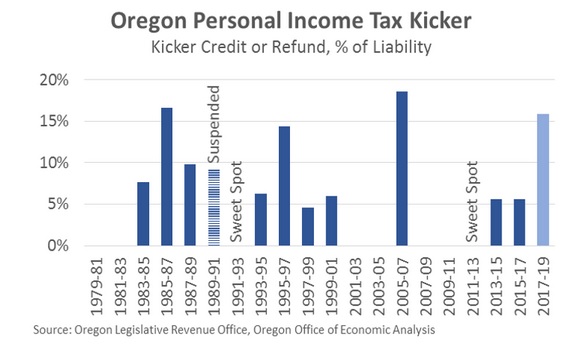