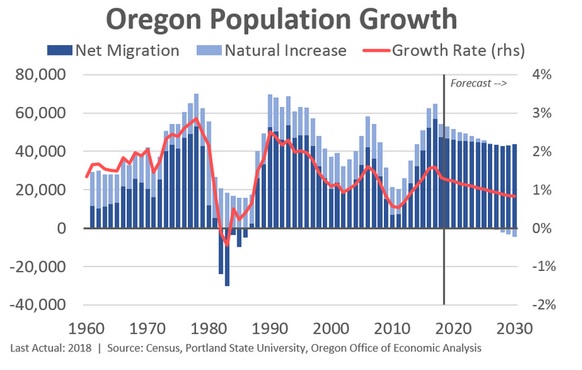 In recent months we have discussed the big picture outlook for labor supply, the silver tsunami of retirements, how migration is slowing but remains the key driver of population gains, and how birthrates are dropping and deaths are rising. However, what we haven’t done in some time is update the nuts and bolts on migration. Lately, I have been getting requests for presentations on migration and what follows largely stems from updating some of our office’s standard charts. For more on migration and how it impacts Oregon, see Mark’s Destination Oregon presentation from a few years ago.

First, our standard population chart we include in every presentation we give shows both the number of new Oregonians each year and the growth rate. Even as migration flows returned in the recent years, Oregon is a larger place today so the growth rate remains lower than what we saw in the 1970s and 1990s.

In terms of who moves to Oregon, it is important to keep in mind that migration is for the young. This goes for both those moving into Oregon and those moving out of state. And while Oregon does see a net gain from all age groups, 20- and 30-somethings account for the lion’s share. Our office pays particular attention to those in their root-setting years as this is when most people begin their careers in earnest, settle down, get married, have kids, and buy a house. This matters economically because the 20- and 30-something represent an influx of young, skilled labor for local businesses to hire and grow their operations. 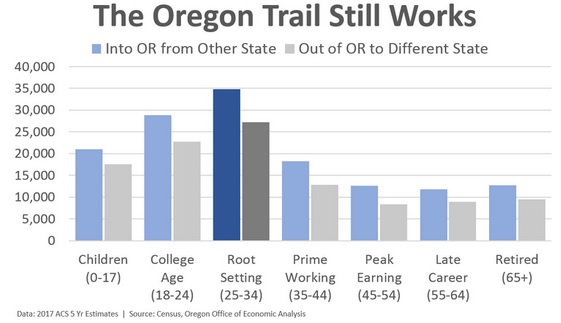 In terms of where migrants are moving from, it typically is everywhere in the country except for Washington. In good times and in bad, more Oregonians move to Washington than Washingtonians move to Oregon. Some of this is likely due to tax policies, but some of this is also the classic suburban play, both of which are greatly influenced by our largest population center being located on the border. Overall, 30-40% of in-migrants typically come from California and then Oregon gains a little bit from every other state. The California migrants disproportionately locate in central and southern Oregon. Migrants from other states tend move in patterns similar to overall population in the state, so mostly to Portland and then the other urban areas as well.

* Since 2013 Californians no longer disproportionately move to the coast. Apologies for the mistake. See this post for more. 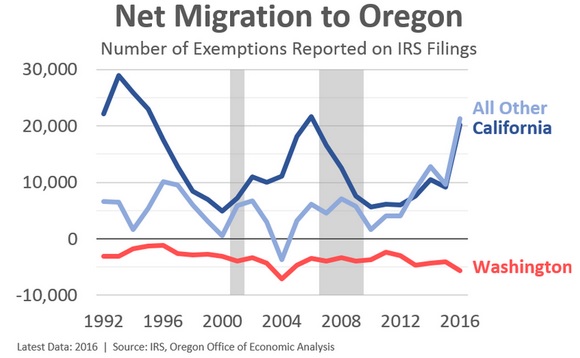 Now, among the non-West Coast states, the specifics do vary from year to year and even across data sets. I tend to focus less on any given year and look across time to see larger patterns. The reason is we will occasionally see a big gain from North Carolina or a big loss to Louisiana, but those are not typical and are blips along the way. Additionally different data sets vary as well. Over the past decade the ACS shows mostly losses to Arizona and gains from Idaho, while IRS migration statistics show the exact opposite pattern. Update: In the comments Guy mentions that IRS is probably a better data set given it covers the majority of the population. The ACS is based on a sample and is inherently more noisy. The advantages of the ACS is getting the characteristics of migrants (demographics, employment, income, etc) which the IRS data lacks.

Looking across the state shows which counties are gaining or losing population to other Oregon counties and that nearly all are gaining population from other states. Again this is just a single snapshot in time. Earlier in the expansion, nearly all migrants within Oregon were moving to the Portland MSA as that’s where all the job growth was occurring. Today, as the economy is growing everywhere, migration patterns are a big more spread out and 2 of the big 3 Portland area counties saw net out-migration to other Oregon counties. This is also not typical, but shifts like this are something our office is keeping an eye on. Similarly, Oregon counties rarely experience net out-migration to other states, as such the losses in Harney, Morrow, and Umatilla are likely more noise and less signal but worth monitoring moving forward. 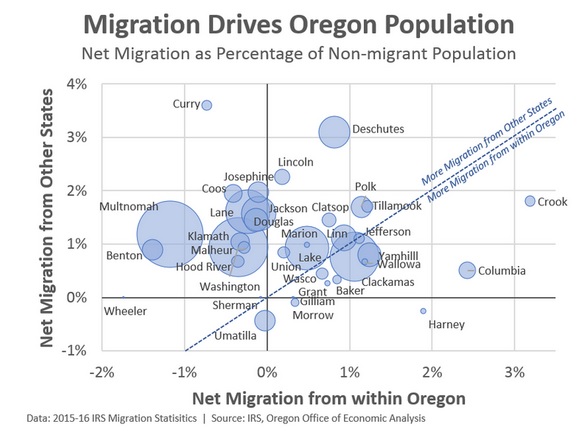 Finally, a friend of our office asked about returnees to Oregon. Or are we seeing more people move back to Oregon after leaving the state earlier in their lives? We lack good data on this but Census data does show which state someone was born in, where they lived last year and where they live this year. This is an incomplete picture of someone’s life, obviously, but it is the data we have available. What we see so far in the Census data is returnees to Oregon are pretty steady both in number and as a share of all in-migrants to the state. Over the past few years 1 out of every 6 migrants to Oregon were born in the state. This includes the fact that 1 out of every 8 Californians moving to Oregon were actually born in Oregon as well. 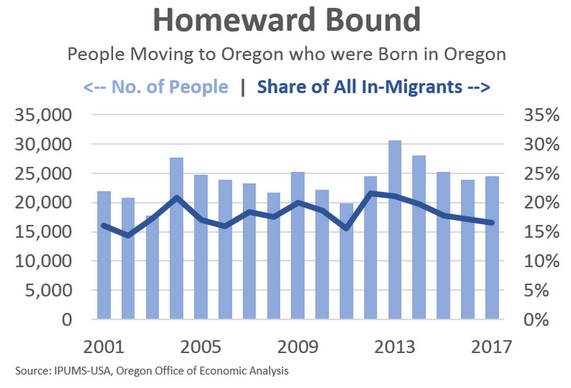