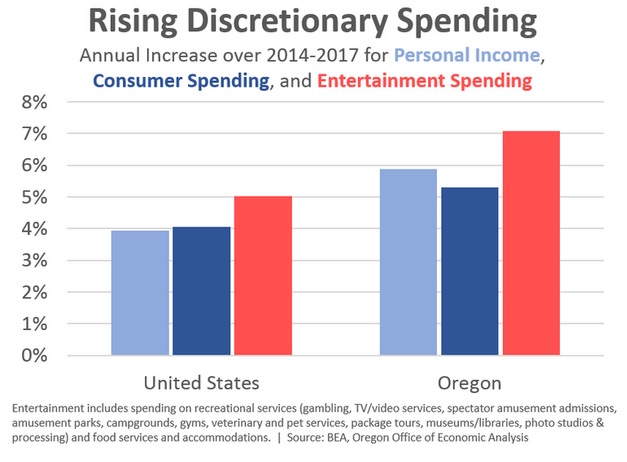 The best economic news in recent years is the growth seen in household incomes. They are rising as we have more Oregonians employed who are working more hours and for higher pay. Oregon’s growth has been considerably stronger than what is experienced in the typical state and our median household income now matches the U.S. This has not happened since the mills closed in the 1980s.

Importantly for gaming, households are feeling confident today. Consumer sentiment is high as incomes rise and gas prices remain relatively low. This is translating into more discretionary spending across the board. In fact entertainment spending — spectator events, museums, going out to eat, etc — in recent years has increased significantly faster than income growth or other types of spending. This is not debt-financed, but represents a shift in the types of goods and services households are buying today. Oregon’s aggregate growth outstrips the nation because our underlying economic gains are stronger, and due to faster population growth.

That said, while overall entertainment spending is increasing at a faster pace, it is not being spent quite as much on gaming in particular. Yes, gambling revenues are up, make no mistake. However other types of discretionary spending are rising faster. We can see this clearly in the Las Vegas chart below. Tourists are back to pre-Great Recession levels. Spending on Leisure and Hospitality is at historic highs. However gaming revenues are just now getting back to where they were more than a decade ago. There has been a shift in consumer patterns, even as gaming remains a normal good in most places. 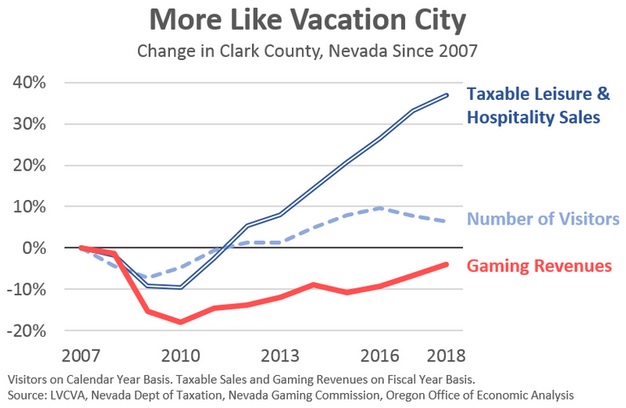 However, even in a relatively strong economy nationwide, some mature gaming markets are seeing tepid gains at best. This is in large part due to increased competition. The states leading growth in recent years (MD, OH, NY) have all recently legalized gaming, added new casinos and significantly increased the number of slot machines. Much of these gains have come at the expense of their neighboring states, who legalized gaming years and decades ago.

With this nationwide background, Oregon stands out. Growth in video lottery sales are twice that of the nation overall and other fast-growing, mature markets like Colorado and Nevada. This highlights the impact of Oregon’s video lottery terminal replacement program has had on sales. Over the past few years, Oregon Lottery has replaced all of the VLTs statewide and upgraded the underlying infrastructure and system. As the new VLTs were deployed statewide, sales increased as discussed before. Roughly speaking, given national trends, half of Oregon’s video lottery sales growth is due to overall economic conditions and half due to the VLT replacements. 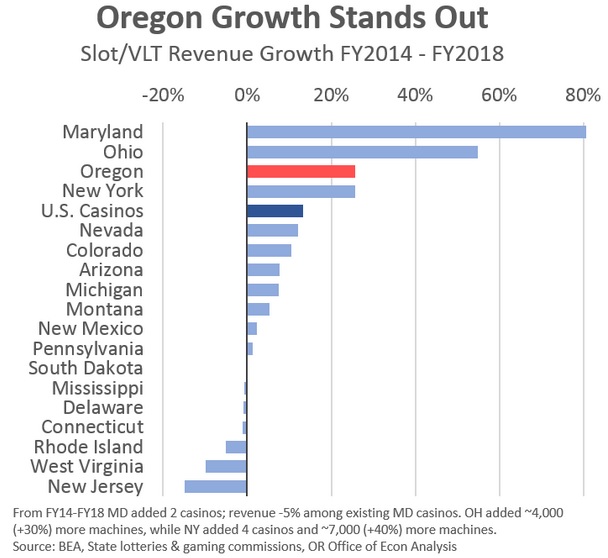 Given the cannibalization due to increased competition seen throughout the country, the biggest issue facing the Lottery in recent years was the opening of the ilani Casino Resort in southwest Washington. Beginning with our 2016 forecasts, our office incorporated a large impact from the new casino in the outlook. However, a big impact has yet to materialize. The actual impact on sales is running about 15% of our initial projections from a few years ago. This impact is smaller and more geographically confined than initially expected. As such, our office’s forecast for this biennium has increased considerably — $162 million total, with $102 million coming from stronger video lottery, $43 million due to the billion dollar jackpots, and $17 million due to more administrative savings from Lottery. In somewhat comforting forecast news, our office was not alone in overestimating the impact on the local gaming market. That at least makes us feel a little bit better.

Looking forward, at this point our office does not expect there to be further, significant impacts from the casino on our statewide forecast. Now, there may be ongoing issues, even a further erosion of sales at retailers along the border, but these are not likely to impact the topline forecast much. One main reason is that new casinos tend to ramp up for a year or two before stabilizing, or even seeing some declines. ilani will hit the two year mark here in a couple of months. One potential future change that would cause us to revisit these assumptions would be a hotel addition which would change the casino from a day trip into more of a destination. Our office and the Lottery research team continue to monitor these trends and discuss the outlook. 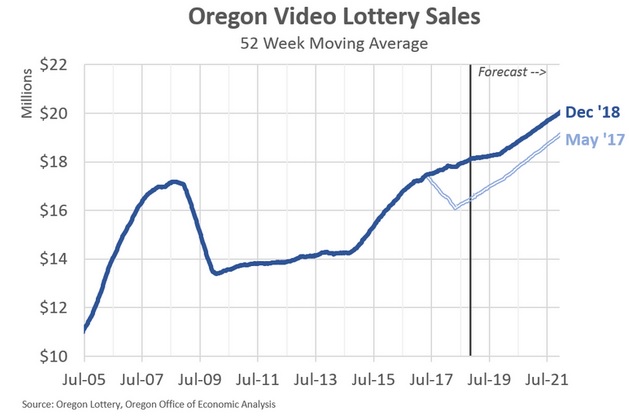 All of that said, the underlying outlook for Lottery remains closely tied to the economy and income. That strong video lottery growth mentioned above (26%) perfectly matches the growth in Oregon personal income (26%) over the same time period. Lottery as a share of income in Oregon remains stable in recent years, and of course this is lower than the housing bubble highs hit just after the introduction of line games back in 2005. 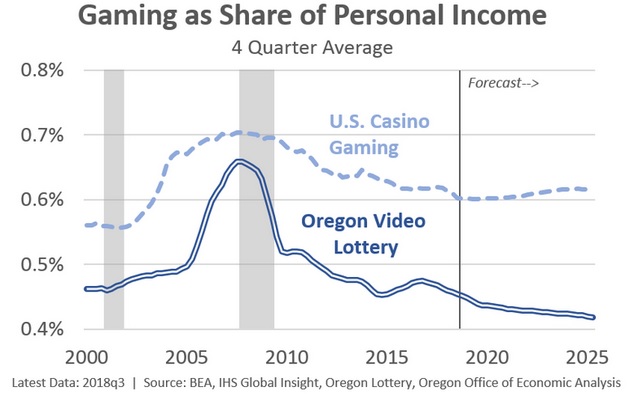 There are two main points to make in terms of the Lottery outlook.

First, Lottery sales continue to increase. Oregon is and is expected to see increases in employment, wages, household incomes, and overall population in our office’s forecasts. As such, sales and available state resources (transfers) will increase in the future. These gains overall will be in the 3.5-4% range per year.

Second, our underlying personal income forecast for Oregon is around 5% per year. This means that video lottery sales will grow but at a slightly slower pace than overall income in the state. This is due to three main risks to the outlook, excluding recessions and the business cycle in general. One is increased competition for entertainment spending. As discussed, discretionary spending is rising, but other entertainment options like going out to eat, or to the movies or sporting events are grabbing a somewhat larger share than gaming. Two is increased competition within the gaming industry, be it another private casino, online gaming (legal or illegal) or the like. As seen nationwide, gaming competition only increases. Three is the potential change in gaming preferences among younger generations. There is no question that Millennials and Gen Z (still a placeholder name) enjoy gaming. However it is much more Xbox and Playstation and less slot machines and card tables than their parents and grandparents.

Bottom Line: Oregon Lottery sales continue to increase due to an improving economy and new game offerings. The outlook calls for ongoing growth and an increase in available resources for the state budget. However, the outlook is not without risks. Our office tends to view competition for household entertainment spending, other gaming options, and shifts in tastes and preferences to be more downside risks to the outlook. That said, to the extent these risks do not materialize or they have less of an impact — not unlike ilani — revenues will be higher than the baseline.