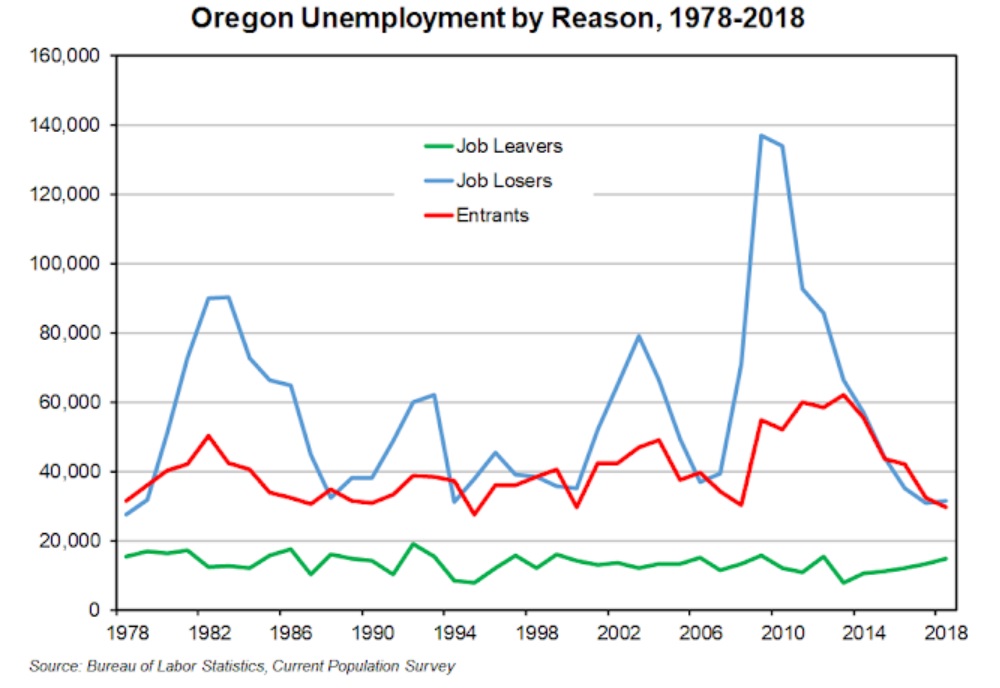 There are three main reasons for unemployment reported by Bureau of Labor Statistics. These primary reasons categories are job losers, job leavers, and entrants:

– Entrants consist of two subgroups who were not in the labor force prior to beginning a job search: Reentrants are unemployed people who have past work experience but were not in the labor force for a period of time prior to beginning their current job search. New entrants are unemployed people looking for their first job. They have no previous work experience in Oregon.

Oregon’s number of job losers increases the most of all three main categories during recessions, and conversely, declines to lower levels during expansions. The number of entrants also tends to rise to some degree in the aftermath of recessions. This is known as the “added worker effect,” where either a layoff or the possibility of a layoff to one member of a household can cause other members to search for jobs to help maintain household income.

There are smaller percentages of unemployed job leavers during recessions and higher percentages during expansions. In stronger economies people are more willing to voluntarily quit a job and search for another one. In 2010, in the aftermath of the Great Recession and in the early stages of the current expansion, 71.0 percent of Oregon’s unemployed were job losers, 23.5 percent were entrants, and 5.4 percent were job leavers. These shares shifted by 2018, when the percentage of job losers declined to 48.6 percent of total unemployment, and both the share of entrants and job leavers increased to 34.2 percent and 17.2 percent, respectively.

To read more about job turnover and unemployment by reason, read the full article here. It was written by Tracy Morrissette, the Local Area Unemployment Statistics Coordinator.