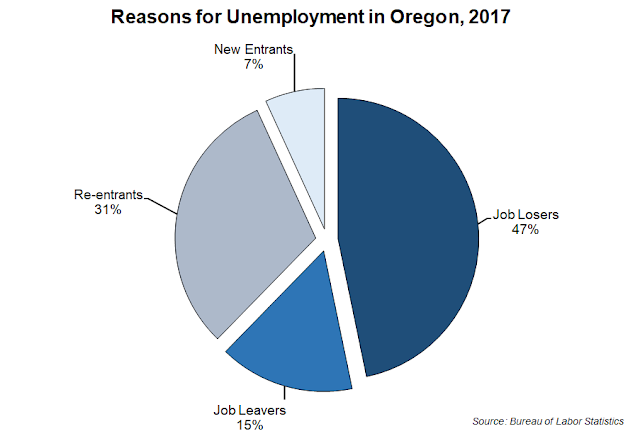 The labor force consists of all residents 16 and older who are employed or who are unemployed and actively seeking work. The numbers of employed and unemployed people are determined primarily by a monthly survey of about 60,000 households nationwide, including roughly 1,000 in Oregon. To avoid double-counting those who hold more than one job, each person in a sampled household is counted only once in the monthly labor force statistics.

A labor force participant is counted as unemployed during the month if, during the week specified in the survey, he or she: had no job, was available for work, and made specific efforts to find work, or
was waiting to be recalled to a job after a layoff, regardless of whether or not he or she was looking for other work.

There are four major categories of the unemployed, based on a reason for unemployment:

The share of the unemployed who are job leavers typically varies with the state of the economy. During recessions, fewer people voluntarily leave their jobs since fewer opportunities exist elsewhere. When the economy and labor demand are strong, more people are likely to quit their jobs because they are confident something better will come along. In 2013, as the jobs recovery was really just starting, job leavers accounted for 5 percent of the unemployed. In 2017, job leavers accounted for 15 percent of all unemployed Oregonians.