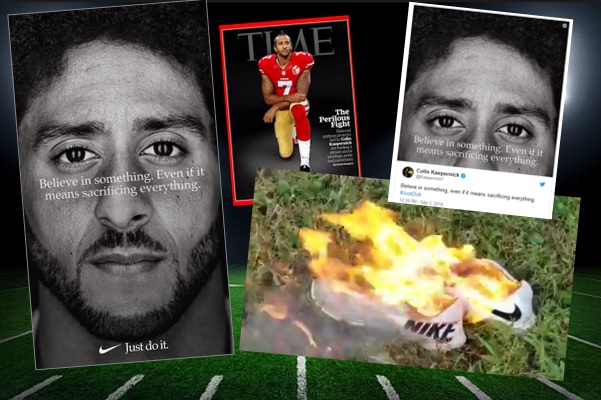 Controversial former San Fransisco quarterback, Colin Kaepernick, has been selected by NIKE for its 30th anniversary Just Do It campaign. The decision grew mixed reaction online and NIKE shares fell 2% upon the morning announcement.

NIKE is the official jersey sponsor and provider for the National Football League.

A person with knowledge of the new NIKE agreement was quoted in the Washington Post as saying ““It’s a top-level football deal, a deal that reflects him as an icon and an athlete, not just an athlete.”

It comes at a risky time for both NIKE and the NFL.  The NFL is suffering from declining ratings and the controversy has deeply divided American fans. Yet, NIKE is known for their advertising edginess and courting controversy.

Here is a recent Wall Street Journal poll on the protest Showing how divided the issue is in America.

A majority of voters say that it is not appropriate for NFL players to kneel during the national anthem to protest racial inequality in the United States, although the country is deeply divided on the question along partisan and racial lines, a poll released Friday from NBC News and The Wall Street Journal shows.

The survey found that 54 percent of voters called kneeling during the anthem inappropriate, while 43 percent say that it is an appropriate way to bring attention to the problems that NFL players and others have cited as the reason for their protest.

What are your thoughts on the NIKE decision?