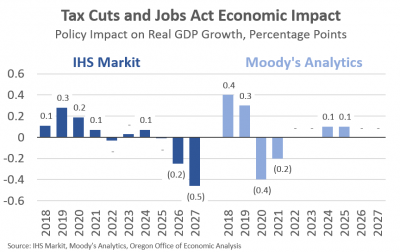 This morning the Oregon Office of Economic Analysis released the latest quarterly economic and revenue forecast. For the full document, slides and forecast data please see our main website. Below is the forecast’s Executive Summary.

The U.S. economy continues to perform well. Economic growth has picked up in recent quarters and job gains remain strong enough to pull down the unemployment rate even as more individuals are looking for a job. More importantly the near-term prospects for economic growth are good. The business cycle is not yet waning. The tight labor market drives wage growth higher. And as the economy approaches capacity, inflation is set to rise after five years running below target. From this relatively strong cyclical vantage point, the recently passed Tax Cut and Jobs Act by the federal government will boost near-term growth even further. However, longer-run forecasts remain relatively unchanged, in part due to the temporary and expiring provisions in the legislation.

In Oregon, the outlook remains bright as the economy continues to hit the sweet spot. Employment growth is more than enough to meet population gains and to absorb the workers coming back into the labor market. Wages are rising faster than in the typical state, as are household incomes. That said, employment and measures of economic wages have come in below expectations in the second half of 2017. From this somewhat lower starting point, the modest economic boosts provided by federal tax changes results in a relatively unchanged forecast overall.

Since the September 2017 forecast, two significant factors have come into play that have changed Oregon’s General Fund revenue outlook. The first factor, the new federal tax law (Tax Cuts and Jobs Act), stands to reduce state revenues in the near term, and will boost them in future budget periods. The second factor, a potential equity market correction, draws down revenues after a short delay.

Oregon’s tax collections are tied to federal tax law both directly and indirectly. The starting point for calculating Oregon income tax is taxable income from a filer’s federal return. As a result, most federal changes to what is defined as income, or to what can be deducted or excluded from it, directly feed into Oregon tax collections. The new 20% federal deduction for pass-through income will feed directly into lower Oregon taxable income, and reduce Oregon revenues.

Ignoring behavioral responses and other dynamic effects for now, static impact estimates suggest that Oregon’s General Fund revenues will be reduced by more than $200 million in the current biennium due to TCJA. This impact reverses during the next decade, increasing revenues by more than $200 million per biennium. Several provisions contribute to this pattern, including accelerated depreciation (expensing), new inflation factors, expiring individual provisions and repatriated income from multinational corporations. Due to a quirk in current tax law, multinational repatriation represents a near-term revenue loss in Oregon rather than a windfall. 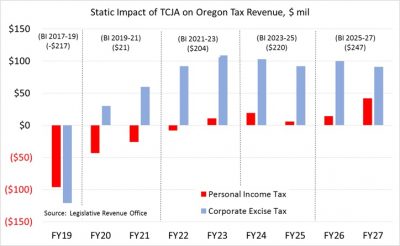 These static revenue impact estimates only tell part of the story, however, as households, firms and tax professionals are all certain to change their behavior in light of the new rules of the game. Many of these behavioral responses, including the macroeconomic effects, will serve to mute the impact of TJCA on Oregon General Fund collections. While changes in the timing of tax payments are already evident, it will take some time before it becomes clear how many taxpayers will change their filing status in light of TJCA provisions.

Finally, Oregon’s General Fund is sensitive to equity prices, given our dependence on personal income taxes. The performance of equity markets feed into personal and corporate tax liability in many complex ways, but capital gains are the largest single piece. Although housing wealth is playing a larger role in driving taxable capital gains during the current business cycle than in the past, earnings and losses in stock markets account for the lion’s share of movements in taxable capital gains in the typical year.