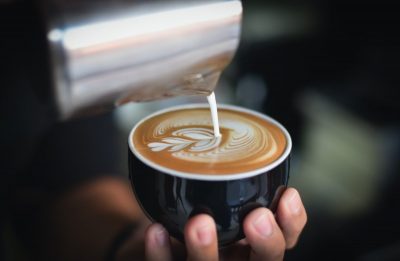 According to the National Coffee Association of the U.S.A., which has tracked coffee consumption through annual surveys since 1950, 83 percent of Americans 18 years and older say they drink coffee and 62 percent drink it daily. With such a large majority of Americans drinking coffee, it’s no surprise to find several coffee establishments in cities throughout the state, and sometimes multiple shops on the same block.

Coffee shops and stands are classified in the snack and nonalcoholic beverage bars industry according to the North American Industry Classification System. This industry includes other establishments serving items such as donuts, pretzels, ice cream, and frozen yogurt. In 2016, there were 1,229 establishments in this category with an annual average employment of 13,150. About half of these establishments were located in the Portland metro area.

Though snack and nonalcoholic beverage bars is a small industry, comprising less than 1 percent of total statewide employment, it is a growing industry. Growth in both the number of establishments and employment in the industry has outpaced the average rate of growth for all industries. From 2001 to 2016, the industry’s employment doubled in Oregon, whereas total employment for all industries increased by 15 percent. Similarly, the number of establishments increased by 71 percent compared with 31 percent for all industries. Growth at snack and nonalcoholic beverage bars has also outpaced the larger food services and drinking places industry.