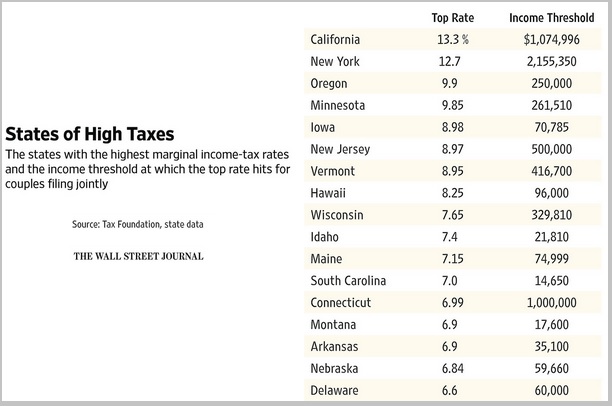 Congress passed the most sweeping tax reform since 1986 on Wednesday, and with any luck that success for the country will trigger a new reform debate in many states. To wit, how much will they have to cut income-tax rates to retain and attract the high-income earners who finance so much of their state budgets?

You can figure out who most needs reform by the decibels of protest. Amid other apocalyptic warnings, New York Gov. Andrew Cuomo last weekend declared that the GOP bill’s limit on the state-and-local tax deduction will trigger “an economic civil war” between high- and low-tax states. California Governor Jerry Brown has likened Republicans to “mafia thugs” while Mr. Cuomo calls the bill a “dagger at the economic heart of New York.” By heart, he apparently means the state’s top earners who pay for Albany’s ever-higher spending.

The truth is that few taxpayers even in high tax states will be hurt because they won’t need a deduction beyond the $10,000 state-and-local cap in the bill. Tax writers estimate that only about 5% of households will even itemize their deductions because the bill nearly doubles the standard deduction to $24,000. Most affluent households who do itemize will also be held harmless because of tax-rate reductions.

But the tax math will be tricky for many high-earners in states with the highest tax rates. The bill reduces the top federal tax rate to 37% from 39.6% and increases the threshold at which it kicks in to $600,000 from $470,000 for couples filing jointly. Our friend Don Luskin did the math and says that high earners in states with top rates exceeding 6.56% could see their tax bills increase.

The nearby table shows the 17 states with top income-tax rates exceeding 6.56%. The four with the highest income tax rates have Democratic Governors—California, New York, Oregon and Minnesota—and liberal political cultures heavily influenced by public unions. The 12.7% rate is for New York City and the rate for the rest of the state is still high at 8.82%. But Republicans control the governorships and legislatures in six of the 17 states.

Remarkably enough, some high earners in Illinois will experience a cut in their marginal rate, at least as long as GOP Gov. Bruce Rauner can stop his Democratic legislature from raising taxes above the state’s 4.95% flat rate. Yet taxpayers in Indiana will get a bigger net tax cut because the state’s top income-tax rate is 3.23%.

This ought to put pressure on high-tax Midwestern states such as Wisconsin, Iowa and Minnesota to reduce their rates. If Governor Scott Walker wants another policy victory as he runs for re-election next year, he should propose an across-the-board tax-rate cut in January to keep Wisconsin competitive.

Messrs. Brown and Cuomo know that limiting the deduction will increase the existing rate divide between high- and low-tax states. New York, New Jersey and Connecticut have been losing billions of dollars each year in adjusted gross income from high earners fleeing to lower tax climes like Florida. Nevada will become an even more attractive tax haven for wealthy Californians.

The problem is more acute when you consider that the top 1% of earners pay nearly 50% of state income taxes in California and New York, and 37% in New Jersey. States may experience significant budget carnage if more high earners defect. To head off a high-earner revolt, Mr. Cuomo could seek to eliminate the millionaire’s tax he campaigned against in 2010 but has repeatedly extended. Mr. Brown could campaign to repeal the 3% surcharge on millionaires he championed in 2012.

On the political evidence so far, they will do no such thing. Democrats instead plan to use the elimination of the state-and-local tax deduction to bludgeon Republicans in the 2018 elections, even as they continue to drive their high earners out of state. But the smarter states and politicians will recognize reality and reform their tax codes to make their states more taxpayer friendly.