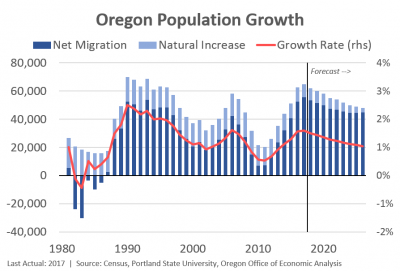 When the latest population estimates for Oregon came out, I promised you an updated on our office’s forecast when it was available. Since then, Kanhaiya, the state demographer in our office, has updated the population forecast and we did discuss it a bit with the Legislature at our latest forecast release as well. The upshot of the new outlook is our forecast for Oregon’s population has been raised. We are expecting a larger population and slightly stronger population growth rates over the next decade than we previously assumed.

Now, it can be hard to tell that the outlook is a bit stronger today if you just look at our standard population forecast chart shown above. That’s because the general nature of the outlook remains unchanged. Oregon is growing, and net migration is driving the growth. What has changed relative to our previous outlook is the composition of this growth moving forward. Oregon is expected to be even more reliant upon migration than we previously thought. Births continue to come in lower than expected, and deaths are rising a bit faster than expected. So the overall increase in the population forecast is entirely due to stronger migration trends. Now, again, this general flavor of an outlook has been what our office has expected for quite some time. As the population ages, we will see more deaths, and births have been disappointing for some time. However, in recent years these trends have been a bit more pronounced than expected. Our forecast has been revised accordingly. 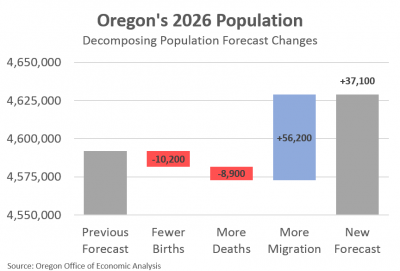 In fact the sharper decline in the natural increase (births minus deaths) is now leading our outlook to suggest that by 2029 the number of deaths in Oregon will actually outnumber births. This date has been pulled forward relative to previous forecasts due to the population numbers in recent years and expectations about their future trends. 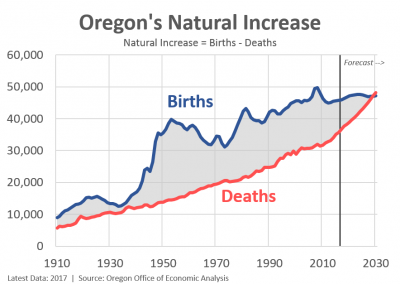 What this means, is that migration is no longer just one of the primary drivers and lifeblood of Oregon’s economy — and out office’s long-term outlook — but it is also a risk to the outlook. THe reason it is a risk is that migration is an increasing share of our population growth. This growth does wonderful things for our economy on net, in particular it brings in young, skilled, working-age households. There are growing pains too, but overall it is a clear boon for Oregon. However, if this growth, or these expected migrants don’t come to Oregon in the future — for whatever reason — then our office’s long-term outlook will be revised lower. It would mean a smaller and slower growing economy, everything else equal. It would be fewer sales for businesses, it would mean fewer workers, lower tax revenues and the like. So while migration is overall beneficial and a major driver of our office’s long-term outlook, it is also the likely linchpin. As such, that makes migration a risk to the outlook as well.

Finally, Kanhaiya’s been looking into births a bit more in depth and I want to revisit the issue in the near future. The fact that births are not increasing much has a number of implications and also a number of drivers. There are also a few national studies/reports discussing this issue that I’d like to tie back to the Oreogn data as well.