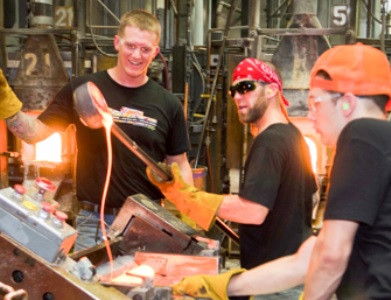 Bullseye Glass Company, a locally owned art glass manufacturer with deep roots in Southeast Portland and a 40 year history of leadership in the arts community, filed a lawsuit today in federal court to expose the state’s irrational and discriminatory conduct, obtain damages for unconstitutional actions which caused irreparable harm to Bullseye’s business operations and reputation, and to overturn an unlawful, retroactive application of a federal regulation. The lawsuit seeks $30 million in damages and names Governor Kate Brown, the heads of the Oregon Department of Environmental Quality and Oregon Health Authority and the Multnomah County Health Department for numerous acts of deception and failure to effectively protect the public health and environmental safety.

“Bullseye has always welcomed clear, tough state environmental protection regulation that is fair and evenly applied to all businesses in a non-discriminatory manner,” stated Bullseye Vice President Jim Jones. “The record is clear: we have a consistent history of full compliance with our DEQ air permit. But when the government over-reaches—as in this case—to use tactics that cynically deceive and alarm the public and deliberately conducts itself in an arbitrary, irrational manner, even the most compliance-oriented company has to stand up and say: Enough is enough.” Jones adds that the lawsuit is intended to use the facts to expose the government’s deliberate and reckless assault on Bullseye—resulting in the sabotage of the company’s compliance efforts and inflicting significant damage to its business operations and reputation.

Bullseye alleges in the complaint that the State, acting in concert with the regulatory agencies, covered up and concealed its failure to regulate emissions.

By taking the following actions, the State singled out Bullseye in an effort to divert attention from its failure to protect the citizens of the State:

– Systematically misrepresenting the results of a moss study and an air monitoring test, both of which were flawed in design and implementation
– Leaking incomplete and misleading information to the press, which triggered a public panic
– Concealing from the public and Bullseye favorable soil test results
– Using Bullseye as a scapegoat to conceal from the public DEQ’s failure to establish any program to identify and control toxic emissions from small- and medium-sized businesses
– Distributing false and misleading maps to paint Bullseye as the center of industrial pollution in Portland
– Needlessly stoking public fear by distributing a false warning about contaminated vegetables
– Needlessly stoking public fear by distributing a false warning about lead readings
– Unlawfully asserting federal regulatory control over Bullseye after nearly a decade of telling Bullseye that the regulation did not apply
– Making false representations about federal air standards to invoke extraordinary powers to threaten to shut down Bullseye by taking unprecedented action to issue a “cease and desist order” in order to coerce Bullseye
– Selectively and irrationally creating rules applicable to Bullseye that are more restrictive than the rules applicable to major polluters

The lawsuit describes a course of government conduct unprecedented in Oregon. No business has ever been subjected to this sort of arbitrary, capricious and irrational government action, particularly where the company was in full compliance with its DEQ air permit.

To read the Complaint and learn more, visit https://bullseyevbrown.bullseyeglass.com/