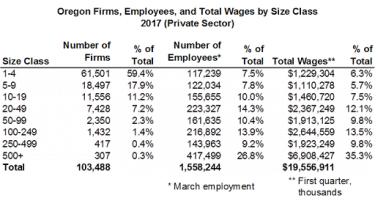 Most Oregon Employers Have Fewer than 20 Employees

These distributions tend to remain stable from one year to the next, even as the overall number of firms, employees, and wages expands or contracts. This doesn’t mean that smaller firms are underperforming when it comes to job creation, or that larger firms are experiencing a bonanza. Size of firm data does not provide us with information about the dynamics of job growth. Instead, it offers a snapshot that can help us understand the roles of small and large firms in Oregon’s economy at a specific point in time. A be c f d e f g h in j k l m n o o