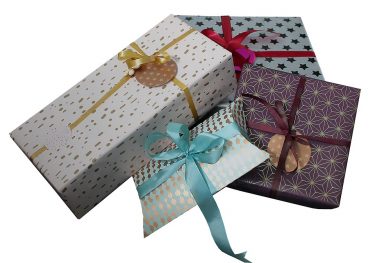 With the holiday shopping season about to hit the home stretch, most consumers say they will spend about the same as last year. But a new survey released today by the National Retail Federation and Prosper Insights & Analytics shows that young adults (18-24 years old) are the most likely to show an increase in spending.

“As Gen Z and Millennials gets older, their purchasing power increases, and the rise in disposable income is sure to be seen by retailers,” NRF President and CEO Matthew Shay said. “This group of consumers has spent time carefully researching gifts for friends, family and themselves, and are ready to begin knocking out their shopping lists.” 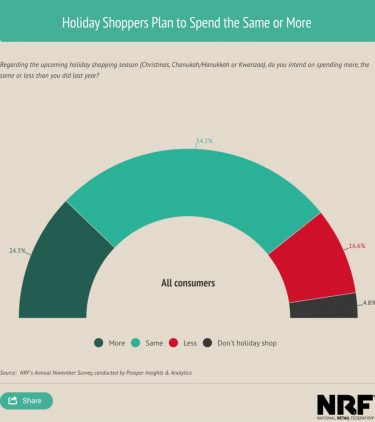 “With an additional full shopping weekend this December, consumers will have plenty of time to browse and complete their holiday purchasing, whether it’s gifts for others or décor for their homes,” Prosper Principal Analyst Pam Goodfellow said. “Gift cards continue to be a popular low-risk option for gift givers, and this year we’re seeing food increase in favor as well. As Americans look to celebrate with even more of the special people in their lives, food serves as a great way to come together.”

In a new question this year, the survey found that 38 percent of consumers plan to donate money to a charity or cause and 37 percent plan to donate items, including holiday meals for needy families. Of those donating, 80 percent said it would have no effect on their overall holiday spending. 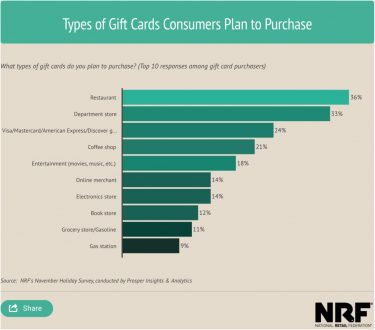 Holiday shoppers plan to purchase an average of four gift cards with an average value of $45 per card, the second most-popular gift after clothing. Spending on gift cards is expected to reach $27.6 billion, up from last year’s estimated $27.5 billion. The most popular gift cards include those for restaurants (purchased by 36 percent of buyers), department stores (33 percent), Visa/Mastercard/American Express (24 percent), coffee shops (21 percent) and entertainment (18 percent). 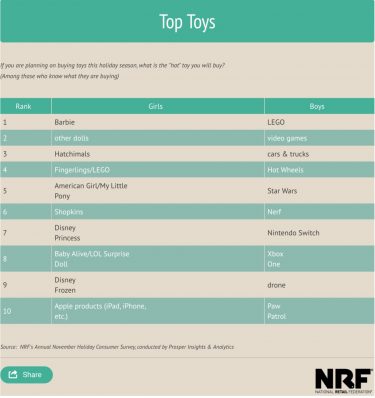 Predicting the “hot” toys each season can be a challenge for harried parents and others buying for children, but many already have their shopping lists prepared. For girls, the top toys include Barbie (19 percent), reigning for the third consecutive year, followed by traditional dolls (13 percent). Some other hot toys for girls to watch out for this season include Hatchimals, Fingerlings/LEGO, American Girl/My Little Pony, Shopkins, Disney Princess, Baby Alive/LOL Surprise dolls and Disney Frozen. For boys, LEGOs again top the list of must-haves (16 percent), followed by video games (7 percent). Other top toys that will be popular for boys this season include cars and trucks, Hot Wheels, Star Wars-related items, Nerf, Nintendo Switch, Xbox One, drones and Paw Patrol.

Credit cards are the most popular form of payment this year, used by 40 percent of shoppers, up from 39 percent last year. That’s tied with debit cards, which will also be used by 40 percent, the same as last year; 18 percent plan to pay with cash and 2 percent will use checks. Of emerging payment methods, PayPal will be used by 36 percent, Apple Pay by 7 percent, Samsung Pay and Google Wallet by 4 percent each and Venmo by 3 percent.

The survey, which asked 7,439 consumers about holiday shopping plans, was conducted October 31-November 7 and has a margin of error of plus or minus 1.2 percentage points.