The latest data from the US Bureau of Statistics show that Oregon ranks in the top 10 worst employment states with an unemployment rate at 6.9%.   If the District of Columbia was not included, Oregon would rank #9 among the 50 states.   Oregon has improved since the recession where it once ranked the second highest unemployment state in the nation.   The labor statistic graph below shows the rank # followed by the unemployment rate. 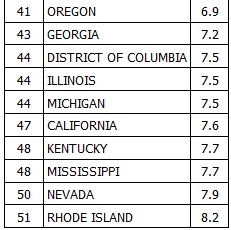 From US Bureau of Labor Statistics