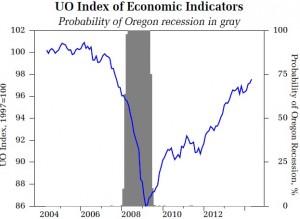 Oregon posted another month of above average growth in May. Highlights of the report include:

– The Oregon Measure of Economic Activity rose to 0.69, compared to a revised 0.16 the previous month. The three-month moving average, which smooths month-to-month volatility in the measure, is 0.50 where “zero” for this measure indicates the average growth rate over the 1990-present period. All sectors contributed positively to the measure.
– Employment and hours worked components both indicated solid manufacturing activity. The construction sector gained on the back of somewhat above average level of housing permits. Low levels of initial unemployment claims continue to be a very positive factor in the household sector.
– The University of Oregon Index of Economic Indicators rose 0.4% in May. Initial unemployment claims fell again to the lowest level since 2006; the pace of layoffs is consistent with that of previous periods of solid economic growth in Oregon and ongoing improvement in labor markets.
– Residential building permits (smoothed) rose, with the gains largely attributable to an increase in multifamily permits. The market for single-family construction remains subdued.
– The Oregon weight distance tax, new orders for core manufacturing goods and average weekly hours worked in manufacturing all improved during May, while consumer confidence edged down.
– The two indicators suggest continued growth in Oregon at an above average pace of activity. Further gains are likely as the national economy will continue its general upward trajectory for the foreseeable future.