by Bill Conerly, Oregon economist
Conerly Consulting, Businomics
One Down Quarter for the Economy Is Not a Recession

The rough rule of thumb is that a recession has two or more consecutive quarters of declining real GDP.* Why not just one quarter? We have a good example of why not just one quarter in the first quarter of 2014. The Bureau of Economic Analysis just revised its estimate of that quarter and it’s negative: a decline of one percent from the preceding quarter. 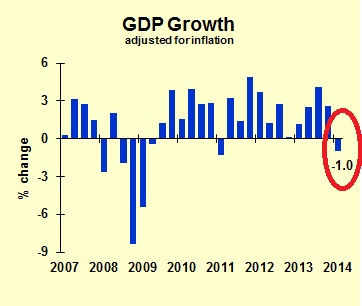 Here’s why this is NOT recessionary. Part of the decline was due to the bad weather in most of the country. Another part was an inventory swing. Business inventories had risen in the second half of last year, and such increases are often reversed in succeeding quarters. The two factors, weather and inventory adjustment, came together in one quarter, along with some weakness in foreign trade.

Looking forward, growth will be moderately better the rest of this year and decidedly better in 2015. More details on the outlook are on my Forbes.com article Economic Forecast 2014-2015.

* Data note: “real GDP” is the inflation-adjusted (“real”) gross domestic product, the value of the goods and services produced in the United States. Data are available from the Bureau of Economic Analysis.