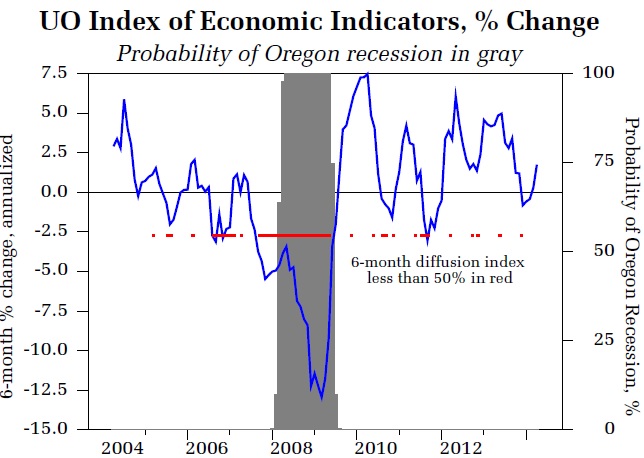 Oregon’s economy continued to grow at an above average rate in April. Highlights of the report include:

– The Oregon Measure of Economic Activity fell to 0.30 in April, compared to a revised 0.92 the previous month. The three-month moving average, which smooths month-to-month volatility in the measure, is 0.32 where “zero” for this measure indicates the average growth rate over the 1990-present period.
– Only the construction sector contributed negatively to the measure. Employment in the construction sector fell during April, while the level of residential permits remains below average.
– Manufacturing employment made a solid positive contribution to that sector. The low level of initial jobless claims bolstered the household measure, while a decline in the civilian labor force was a negative factor. Employment measures in the services sector were generally positive with the exception of a sharp negative contribution from the financial services sector.
– The University of Oregon Index of Economic Indicators was unchanged for the month. Initial unemployment claims fell and remains in a range consistent with ongoing solid job growth. Employment services payrolls (largely temporary help firms), however, slipped after several months of steady gains; the general upward trend remains in tact.
– The Oregon weight distance tax, new orders for core manufacturing goods and average weekly hours worked in manufacturing all edged down during April. Consumer sentiment improved for a third consecutive month.

The two indicators point toward continued growth in Oregon at an above average pace of activity. Further gains are likely as the national economy will continue its general upward trajectory for the foreseeable future.

Dan Mogck, Senior Vice President of Business Banking, KeyBank, adds “Generally, our business clients are experiencing steady to slightly increasing business activity, which is consistent with the economic growth reflected in the Oregon Measure of Economic Activity. Based on the indicators and the sentiment of our clients, this trend of growth is expected to continue.”

Note: Charts have been updated to enhance readability.