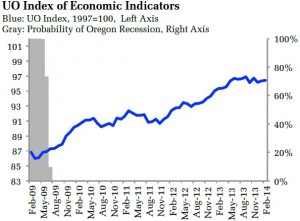 Oregon’s economy continues to expand at a somewhat above average pace. Highlights of the report include:

– The Oregon Measure of Economic Activity was 0.11 in February, compared to a revised 0.32 the previous month. The three-month moving average, which smooths month-to-month volatility in the measure, is 0.27 where “zero” for this measure indicates the average growth rate over the 1990-present period. Similar to the previous month, only the services sector contributed negatively to the measure.
– Residential building permits remain somewhat below normal and thus make a negative contribution, but general improvement in the construction industry is bolstering employment. The labor force component continues to make a positive contribution to the household sector; the post-recession labor force decline may have come to an end.
– The University of Oregon Index of Economic Indicators edged up, but in general has been moving sideways since last September. Initial unemployment claims have been tracking sideways at levels consistent with ongoing job growth. Similarly, we the general upward trend in employment services payrolls (largely temporary help firms) remains intact.
– The Oregon weight distance tax has been rising over the past year, consistent with a faster pace of activity. New orders for core manufacturing goods, however, slipped but in general are tracking sideways.
– The two indicators point to sustained expansion in Oregon at a somewhat above average pace of activity. A return of labor force growth in Oregon may be a precursor to an accelerated pace of activity in future months.