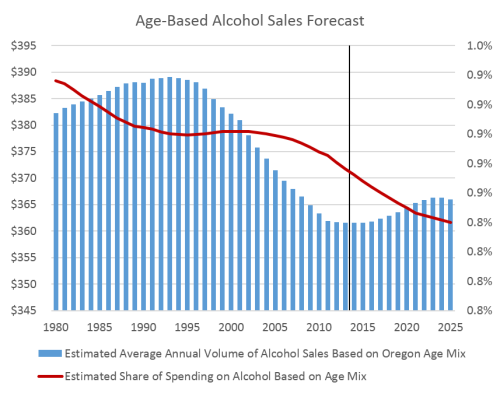 Mark recently gave a presentation to the Oregon Liquor Control Commission in which he detailed consumption trends by age, income, occupation, city size and the like, based on the consumer expenditure survey data our office has been diving into a lot recently. The purpose being to examine how each of these various aspects of the economy impact demand for products. Additionally, our office has  developed a preliminary Oregon “alcohol cluster” in terms of employment, and our colleagues in Washington have shared with us their latest sales and price data, post-privatization. What follows is an abridged version of some of the information, with a more complete set of slides at the end.

One of the most interesting items Mark worked on was an age-adjusted spending outlook. Taking the consumption spending pattern across age groups and then applying that to the population in Oregon, both historically and according to our office’s forecast, yields the following. This pattern was a bit counter intuitive to our prior assumptions. We know that older households spend a lot less on alcohol, but the millenials are large enough in numbers (and 25-34 year olds spend the most on alcohol overall) to largely offset the expected spending declines of the Baby Boomers themselves moving forward, even as the overall share of spending continues to fall.

In terms of local employment, you no doubt have heard about the state’s renowned craft beer scene, highly rated pinot noirs and budding craft distilleries. Based on some preliminary work, here is our first estimate of the Oregon alcohol cluster. Besides the manufacturers, this includes their wholesalers, distributors, specialty retail shops, in addition to drinking places (bars). Since the beginning of 2008 (essentially the onset of the Great Recession), employment in these industries has increased in Oregon 35 percent, or about 4,000 jobs. The comparable U.S. alcohol cluster has seen growth of about 7 percent. These upward trends have bucked the broader Great Recession induced losses and have added a considerable number of jobs in recent years.

Unfortunately, due to data difficulties, these numbers in aggregate are an under count of the actual number of jobs. Many of Oregon’s breweries are actually brewpubs and are classified under restaurants and not beverage manufacturing. It is a very tall task to separate out this data from the broader restaurant information, but for more on the latest in Oregon breweries, see the great work from Employment Department’s Damon Runberg.

Finally, we asked our colleagues up in Washington for the latest on alcohol sales in their state. What follows is an update to our previous look at what happened post-privatization in Washington. Overall, prices increased in the state 10-15% in terms of retail sales. Consumers purchased more products initially, likely due at least in part to the novelty of being able to purchase in many more locations. Since then, sales have been relatively flat. 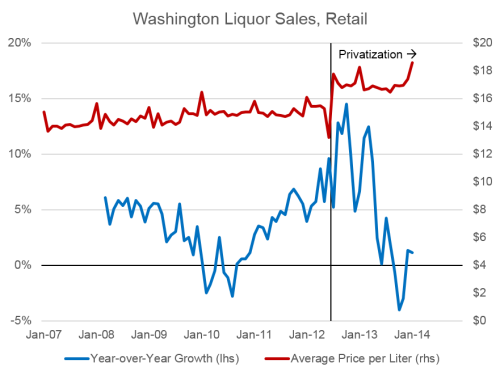 Full set of slides are below.