New occupational data for 2013 was just released by the Bureau of Labor Statistics. Overall 2013 was not only stronger than previous years, since we already knew job growth accelerated, but the pattern of growth across occupations was also more encouraging.  Below is an update on job polarization in Oregon, following the same methodology and sources as our research report last year.

In 2013 Oregon outperformed the nation and the average state just a little bit overall but significantly when it comes to the high-wage and upper middle-wage occupational groups. This is the business cycle kicking in, or the state’s beta kicking in. Oregon tends to outperform during expansions (and fall further in recessions) and the data show this at the occupational level, particularly among the upper middle-wage jobs. These include construction and installation, maintenance and repair occupations which are increasing with the improving economy and housing rebound but also other occupations tied more to the public sector like protective services (firefighters, police officers) and teachers. These gains are also directly tied to the improving economy and stronger cycle as public sector budgets follow the general economy, albeit generally with a lag. 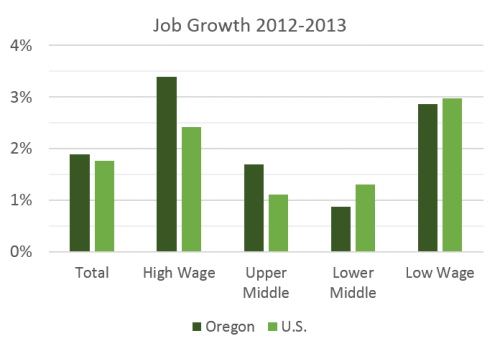 In terms of each occupational group in expansion, the graph below clearly shows the polarization pattern of strongest growth at the high- and low-wage levels. However if you compare with the graph from last year (with data through 2012) the middle-wage occupations have shown improvement. Additionally we have made one, relatively minor, methodological change in terms of the health support occupations. See below for a full explanation. 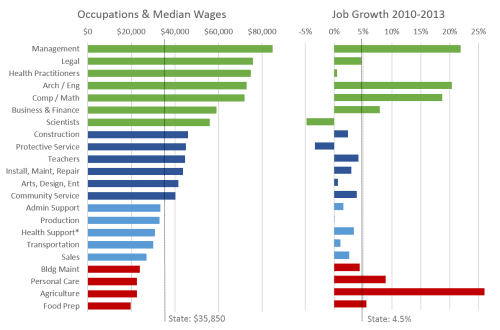 Finally, even as growth in Oregon has spread beyond the Portland Metro in the past year or two, it still largely remains within the other metropolitan areas of the state, namely Bend and Medford but also Salem as well. Rural Oregon, while seeing some job growth, remains further below pre-recession levels than the state’s metropolitan areas. 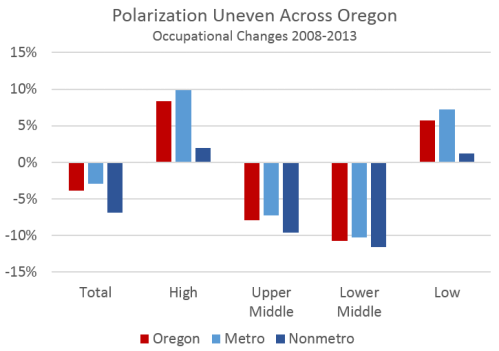 Overall, Oregon’s labor market in 2013 saw an improvement relative to the lackluster growth so far in expansion, however the state is still digging out from the Great Recession and has a lot more room for improvement.

* You may remember that health support had previously shown some large declines relative to everything else and the U.S. overall, which in consultation with the Bureau of Labor Statistics largely turned out to be a data and classification issue. Many of these jobs are now showing up in personal care as personal care aides, and not occupations like home health aides or the like, even though they effectively are the same job, or at least type of job. Given that the data clearly show that these are offsetting each other, our office is now including personal care aides in health support and not personal care. Somewhat confusing, I know, but this does capture the underlying trends better.