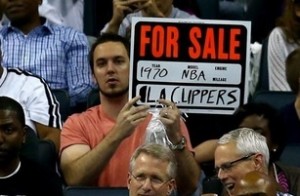 Blazer owner Paul Allen was one of the first NBA team owners to speak publicly on the recent LA Clippers owner, Donald Silverman, charges of racism over a taped conversation.

Shortly after the news break, Paul Allen stated publicly, “If true, the alleged comments by Donald Sterling are abhorrent, and not acceptable for the owner of an NBA franchise.”

The next day, the NBA finished their investigation which included hiring an FBI expert to test the validity of the audio recording. Within hours Paul Allen responded “I completely support NBA Commissioner Adam Silver’s decisive action on the Sterling issue. Great leadership and the league is in good hands.”

Houston Rockets owner, Leslie Alexander was another team owner to make a public statement. Alexander said “Let the players become free agents.’”  Alexander’s suggestion was a way of forcing Donald Sterling to give up the team.  Alexander also tried to defend the rest of the NBA’s owners when he said, “I’m really upset that some of the press has lumped us together as one. We are 30 different individuals and most of us are not even friends. We are business associates. To lump us together is beyond the pale.”
Dallas Mavericks owner, Mark Cuban, gave a rebuke of Donald Sterling, but also gave caution:

“I think there’s a constitution for a reason, right? Because this is a very slippery slope,” Cuban said before Game 4 of the Mavericks-San Antonio Spurs series. “What Donald said was wrong. It was abhorrent. There’s no place for racism in the NBA, any business I’m associated with, and I don’t want to be associated with people who have that position.But at the same time, that’s a decision I make. I think you’ve got to be very, very careful when you start making blanket statements about what people say and think, as opposed to what they do. It’s a very, very slippery slope. Again, there’s no excuse for his positions. There’s no excuse for what he said. There’s no excuse for anybody to support racism. There’s no place for it in our league, but there’s a very, very, very slippery slope.In this country, people are allowed to be morons. They’re allowed to be stupid. They’re allowed to think idiotic thoughts. … Within an organization like the NBA, we try to do what’s in the best interest of the league and that’s why we have a commissioner and a constitution and I think Adam will be smart and deal with Donald with the full extent available. But, again, if you’re saying a blanket, ‘Let’s kick him out?’ I don’t want to go that far because it’s not about Donald, it’s not about his position, it’s about his mess – and what are we going to make a decision on?”