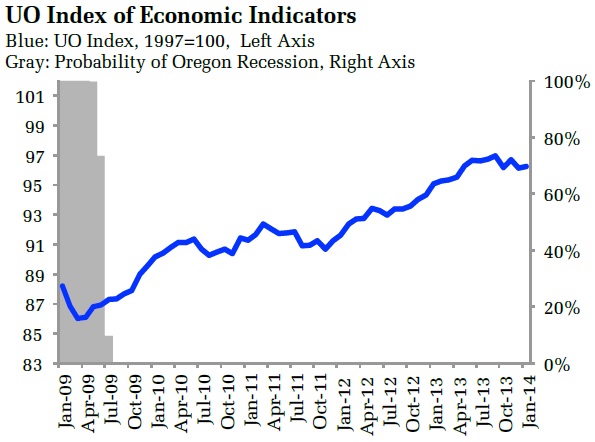 The Oregon economy began 2014 on solid footing. Highlights of the report include:

– The Oregon Measure of Economic Activity was 0.26 in January, compared to an upwardly revised 0.38 the previous month. The three-month moving average, which smooths month-to-month volatility in the measure, is 0.38 where “zero” for this measure indicates the average growth rate over the 1990-present period.

– Only the services sector contributed negatively to the measure in January with the financial services component being a substantial drag. In contrast, employment provided a substantial boost to the construction component. The household sector was supported by the initial claims and labor force components.

The University of Oregon Index of Economic Indicators gained modestly in January, rising 0.1 percent. Initial unemployment claims edged down while employment services payrolls edge up; both indicators are consistent with ongoing job growth in Oregon.

– Core manufacturing (nondefense, nonaircraft capital goods) new orders and the weight distance tax, a measure of trucking activity, both improved while weekly hours worked in the Oregon manufacturing fell modestly again. The latter series appears to be normalizing after jumping higher in 2013, possibly reflecting the impact of additional hiring in the industry.

– The two indicators point to sustained expansion in Oregon at, after accelerating during 2013, a pace of activity somewhat above average. Although weather slowed national growth early in 2014, the negative impacts are expected to be temporary.