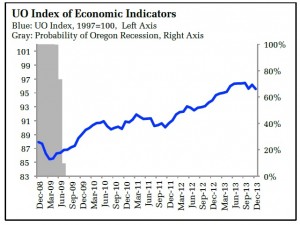 The Oregon economy experienced continued gains in December. Highlights of the report include:

– The Oregon Measure of Economic Activity rose to 0.37 in November, up from a revised 0.16 the previous month. The three-month moving average, which smooths month-to-month volatility in the measure, is 0.17 where “zero” for this measure indicates the average growth rate over the 1990-present period.
– Only the construction sector contributed negatively to the measure. Although construction activity is improving, the level of residential permits and the pace of employment growth in the sector both remain somewhat below average for the Oregon economy. Employment measures in the services sector supported a solid positive contribution for the month.
– The University of Oregon Index of Economic Indicators™ gave up the previous month’s gains in December, dropping 0.6 percent. The two indicators point to sustained expansion in Oregon at an average to somewhat above average pace of activity. The expansion has matured to a point where the UO Index may move sideways until the Oregon economy experiences acceleration in activity.
– Initial unemployment claims reversed the November improvement but remain at a level consistent with ongoing job growth in Oregon. Residential building permits (smoothed) were effectively unchanged in December; permitting activity leveled-out around 1,100 permits per month after rising to the 1,300 range earlier in the year.
– Likewise core manufacturing (nondefense, nonaircraft capital goods) new orders and the weight distance tax, a measure of trucking activity, were also largely the same as November. Weekly hours worked in the Oregon manufacturing sector fell again and were down about an hour since last summer, but remain at a level consistent with continued economic expansion.