My favorite economics chart shows income divided by population (this is income per person) on the vertical axis and time on the horizontal axis.  The time line runs from prehistoric times to the modern era (from, say 1000 BC to 2000).  The line in the chart is basically flat at an income per person of approximately $2 per day (in today’s dollars) all the way from 1000 BC to about 1800, and then it explodes upward, at least it does for some countries.  The meaning of the chart is that nothing much happened in terms of productivity growth until around 1800.  This long period of history is sometimes referred to as the “Malthusian” period in honor of economist Thomas Malthus who in 1798 published a famous book in which he explained why the long-run trend in productivity was flat (no long-run growth in income or output per person).  The reason is that human reproductive power overwhelms any increases in aggregate output.  Any time there is an innovation that increases output, population expands by enough so that output per person does not rise.  As Malthus put it, “the power of population is infinitely greater than the power in the Earth to produce subsistence for man” with the result that the bulk of mankind is destined to live forever at subsistence.  In the chart below, subsistence is represented by the horizontal line which is scaled to equal 1 for income per person in 1800. 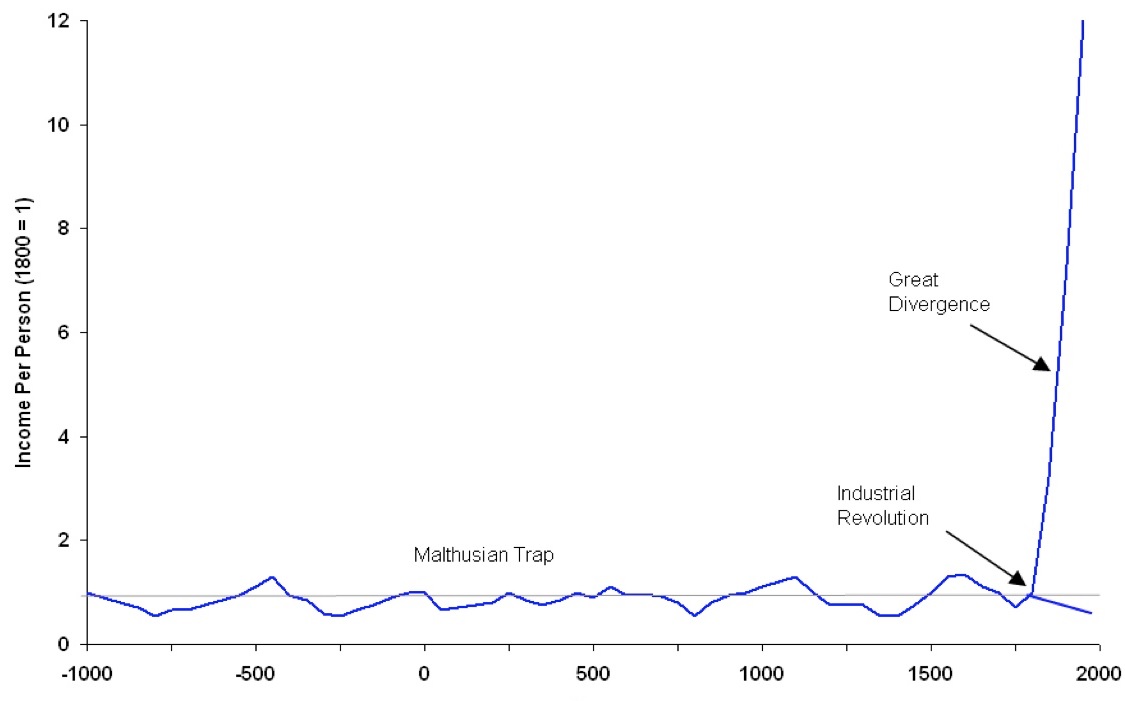 As an explanation for the entire world economic history prior to his writing, this was a succinct and accurate story.  However, as a forecast of the future it was pretty bad.  It may be the worst economic forecast ever made, and that is saying a lot.  Just about the time that Malthus made this forecast, output per person began rising and has continued to do so for the past 200 years.  Let’s call this the “productivity miracle.”

The productivity miracle occurred first in Western Europe and then in North America.  Then it spread to Australia, New Zealand, parts of Asia and Eastern Europe and today is taking place in China and India.  The miracle has brought more than a billion of people out of abject poverty just in the past few decades.

Probably the most important question in economics is to explain why the productivity miracle occurred when and where it did, and why it is has not yet occurred in other areas.  And maybe the most important question:  will it continue?  Nobel Prize winning economic Robert Lucas once famously said that “once you start thinking about economic growth, it is hard to think about anything else.”

One component of the productivity miracle is technological innovation, as expressed in the Industrial Revolution.  Another component is a set of political and economic institutions that support entrepreneurship and trade; institutions like private property rights, the rule of law, free exchange, and limited government.   A third component is having a large enough population to enable specialization and to generate great new ideas.

Another explanation for the productivity revolution is luck.  Professor Robert Gordon of Northwestern University argues1 that the tremendous performance of productivity in the U.S. over the past 200 years has been due to a very unusual and fortuitous confluence of factors and is highly unlikely to continue.  After all, since productivity growth was zero for thousands of years, maybe that is its natural state. The confluence of positive circumstances included three technological revolutions combined with major tailwinds including demographics (women entering the labor force and lengthening longevity, advances in education (huge increase in the literacy rate and graduation rates from high school and college).  Unfortunately, Gordon argues that this is all in the past.  The prospect for productivity growth in the US over the next 50-100 years is very poor in his view, close to zero.

Gordon argues that the US has benefited enormously from three industrial revolutions, the first one starting around 1750 (steam engines, cotton spinning and railroads), the second starting in the last 1800s (electricity, the internal combustion engine, and running water with indoor plumbing), and the third starting in the mid-1900s (computer and internet revolution).  The follow on effects of these periods of technological breakthrough are pretty much exhausted today.  While Gordon does not claim that people will stop coming up with new ideas, he seems to feel that there is nothing on the horizon that compares to the magnitude of the first and second industrial revolutions.

On top of that the demographic, education and other tailwinds are likely to become headwinds over the coming decades.  Population growth has slowed, and thanks to falling labor force participation, growth in the labor force has slowed even more.  Graduation rates from high school and college have stabilized and in some cases have even drifted lower.  Burdensome regulatory rules appear to be expanding (which Gordon believes to be an appropriate response to the environmental degradation created by two hundred years of economic growth).

Although Gordon’s forecasted rate of economic growth is similar to that of the Malthusian period (zero), this does not mean that he is a Malthusian.  Population growth has decelerated over the past fifty years and shows no sign of turning around.  Living standards are not going to plummet back to subsistence; they just are not going to improve very much.

Economist Paul Romer is one of the leading exponents of the so-called “endogenous growth theory” that basically argues that economic growth is determined not by “exogenous” (meaning outside the model) technological change, but rather by policies and institutions internal to the economic system.2  In this theory economic growth is strongly impacted by policy choices.  Romer’s contribution has been to focus on the role of ideas and knowledge.  Knowledge represents the set of “menus” for how goods can be produced and distributed.  Important features of knowledge as a factor of production are that it is not used up by use and that it can be used by many people simultaneously.  In fact, its value expands with use.  A rapidly growing knowledge base is the source of continuing productivity growth.

I suspect that Professor Romer is more optimistic about growth prospects than Professor Gordon.  At least, he would be if appropriate policies are pursued.  What policies are most conducive to economic growth?  This question is the subject of ongoing research, but the theory suggests many things could be important including research and development strategies, intellectual property law, tax rates and subsidies, trade policy, immigration policy, and economic regulation, to name a few.

Can we look to the data?

It would be great if we could conduct controlled experiments to evaluate the consequences of different policy initiatives, but that is generally not feasible in economics.  Maybe the best we can do is to look for “natural experiments” in which different sets of institutions are imposed on otherwise similar states or countries.  The most obvious example is probably North and South Korea, where sharply different political systems have been operative over the past sixty years, with wildly different economic outcomes.  On a less extreme scale, but maybe more useful for current policy debates, we can look to the relative economic success of pairs of states in the US that adopt different policy choices.

1Robert Gordon, “Is US Economic Growth Over?” Center for Economic Policy Research, 2012.