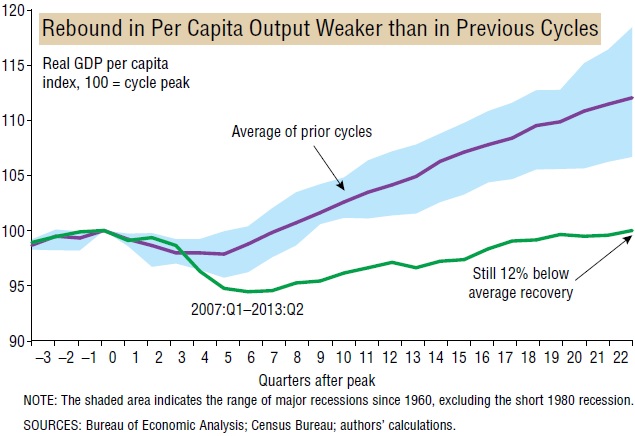 Excerpt from Federal Reserve Bank of Dallas: One way to measure the cost of lost output is in terms of how much worse off society is relative to a baseline trend that might have existed absent the crisis. Such an exercise is crucial to grasping the magnitude of what occurred and the effects of the still-emerging recovery. Output per person as of mid-2013 stood 12 percent below the average of U.S. economic recoveries over the past half-century, corroborating a large body of literature suggesting that recoveries from financial crises are slower than rebounds from typical recessions (Chart 1).  Our bottom-line estimate of the cost of the crisis, assuming output eventually returns to its precrisis trend path, is an output loss of $6 trillion to $14 trillion. This amounts to $50,000 to $120,000 for every U.S. household, or the equivalent of 40 to 90 percent of one year’s economic output. This seemingly wide range of estimates is due in part to the uncertainty of how long it might take to return to the precrisis growth trend. However, output may never return to trend—the path of future output may be permanently lower than before. If that’s the case, the crisis cost will exceed the $14 trillion high-end estimate of output loss.