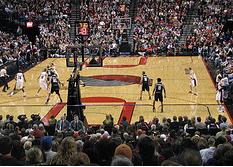 Largest partnership in team history will focus on health in the heart of the city
Portland Trail Blazers,

Two of Oregon’s most dynamic and innovative companies are banding together in a 10-year agreement that will energize Portland’s hub for sports and entertainment, creating an urban showcase for healthy, active living. The Portland Trail Blazers and Moda Health have unveiled a community partnership that changes the name of the Rose Garden to the Moda Center at the Rose Quarter, effective immediately.

The agreement was jointly announced during a press conference today in the center’s South Atrium. At the request of Trail Blazers owner Paul Allen, the new logo for the Moda Center, when unveiled at a later date, will incorporate a rose as a salute to the city of Portland.

“These are the types of large-scale partnerships that are going to take our organization to the next level,” said Trail Blazers President & CEO Chris McGowan. “This agreement enables us to reinvest in the company and the team at levels that impact every aspect of the fan experience, including the facilities, amenities, events and even the product on the court.”

Physical transformation of the renamed arena and Rose Quarter will begin immediately, with new signage and other visual elements being added gradually. New graphics for the home court surface of the Trail Blazers will debut in time for the team’s 2013-14 regular season home opener on November 2 versus the defending Western Conference Champion San Antonio Spurs.

“Since our company was founded in 1955, we’ve invested in projects that create healthy people and healthy places,” said Dr. William Johnson, President of Moda Health. “This partnership reaffirms our commitment to this community as we invite people now to join us in creating in the heart of our city a neighborhood that celebrates healthy urban living. We know that together we can be more. Be better.”

Portland Mayor Charlie Hales, in sounding his endorsement of the agreement, sees the new Moda Center as pivotal to the city’s plans for the Northeast Portland neighborhood that has been the home of the Rose Quarter since 1995.

“We know it’s always a blend of the right civic organizations and the right business partners,” Mayor Hales said. “In that, I suppose, it’s not too different from a coach picking a starting five. The Trail Blazers and Moda Health: that’s a great combination.”

When McGowan first arrived as Trail Blazers chief executive officer in November 2012, he placed a priority on finding a partner to revamp the Rose Quarter. To pilot that process, McGowan hired Los Angeles-based Premier Partnerships, one of the leading naming rights agencies in the country. Over the ensuing months, Premier Partnerships and the Trail Blazers engaged in presentations to and received proposals from numerous companies around the world.

“Though we never geographically limited the brands or companies willing to consider this opportunity, we hoped a locally-based partner would come to the forefront, and we are thrilled to be partnering with a company that shares our vision for the arena and the Rose Quarter,” said McGowan.

Financial terms of the agreement between the Trail Blazers and Moda Health were not disclosed. The two partners are developing a diverse set of initiatives and enhancements that will serve as key connectors for the community to the venue. Those elements include:

• Redesign and restoration of the landmark water and fire fountains outside the arena;
• New food and beverage options for the Commons area and arena concessions;
• Enhanced wayfaring signage and accessibility throughout the Rose Quarter;
• Improvements to pedestrian traffic flow into the campus, including guests arriving from nearby commuter rail stations and bus stops;
• Upgrading of the landscaping and grounds of the Rose Quarter; and
• Seasonal community-building and entertainment programming on the Commons