The BEA released estimates for state GDP for 2012, along with revisions to the 2009-2011 figures. The following takes a quick look at the latest figures and growth so far in recovery.

In 2012, Oregon’s real GDP grew 3.9% which ranks 3rd strongest in the country behind North Dakota (13.4%) and Texas (4.8%) and ahead of the U.S. overall (2.5%). Oregon’s economy, which is more volatile than the average state, has consistently grown faster than the nation in good times and performed worse in bad times. With the most recent economic expansion beginning in 2009, even as lackluster as it has been, the state has outperformed the average state each of the past 3 years with relative rankings of all states of 4th, 4th and 3rd strongest.

In terms of which industry or industries are driving the growth, it really has to do with our strong manufacturing sector. Not only does Oregon have a larger manufacturing sector, relative to the economy, it is also highly productive, particularly our computer and electronic manufacturing industry. With the rebound in electronics in recent years (even if PC sales are slipping) and both the first phase and second phase of the Intel expansion in Hillsboro, it is no surprise to see the industry driving growth in the state. According to the BEA release, Oregon’s durable goods manufacturing accounted for 2.9% of the 3.9% growth in 2012.

Overall across the country, manufacturing tended to lead real GDP growth with durable goods leading 22 individual states and 7 out of the 8 BEA regions. Financial Activites – particularly the finance and insurance portions – also was a strong contributor across the country. Finally, as can be seen in the relative rankings below, mining was a large contributor to a few states even if not to the nation as a whole. In North Dakota, according to the BEA, mining directly accounted for 3.3% of the 13.4% growth. 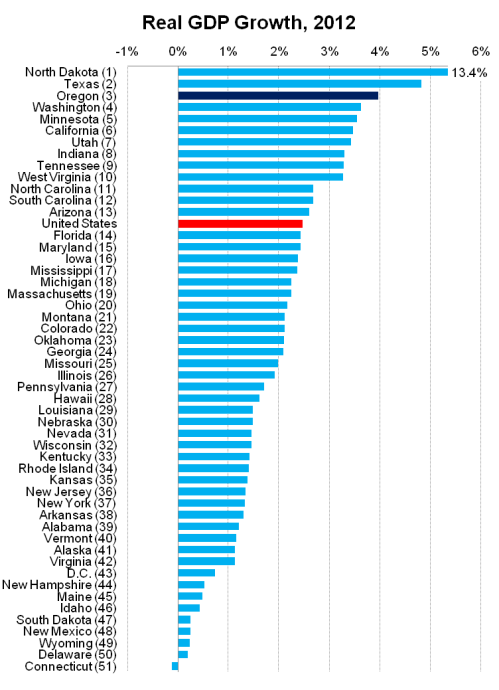 The last graph illustrates real GDP growth in expansion for all states.