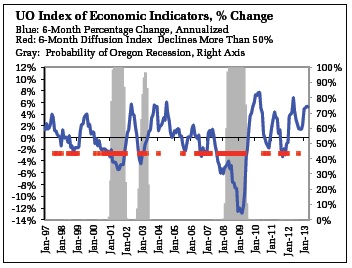 Oregon economic indicators improved further in April 2013. Highlights of the report include:

• The Oregon Measure of Economic Activity rose to 0.33 in April from a revised -0.03 previous month. The three-month moving average, which smooths month-to-month volatility in the measure, was 0.32 where “zero” for this measure indicates the average growth rate over the 1990-present period.
• The manufacturing and services sectors contributed positively to the measure, while the construction and household sectors were a drag. Labor force growth continues to subtract from the measure. Overall, the Oregon economy is growing near to somewhat above its average rate since 1990.
• The University of Oregon Index of Economic Indicators™ rose 0.3 percent in April, while the March number was revised higher. The UO Index has risen in each of the last seven months.
• Initial unemployment claims fell again, and are now in a region consistent with strong job growth. Initial claims were the lowest since May of 2007, prior to the onset of the last recession.
• Residential building permits, nondefense, nonaircraft capital orders, and the Oregon weight-distance tax all improved in April, while consumer sentiment and the interest rate spread were somewhat softer. Residential building permits (smoothed) are at their highest level since February 2008. All index components have improved over the past six months.
• Together, the two indicators point to sustained expansion in Oregon at an average to somewhat above average pace of activity

Ready to learn about the Chinese economy? Jim Mullinax, Political and Economic Section Chief at the U.S. Consulate General in Shanghai will review the changing Chinese economy and what it means for Oregon firms looking to do business overseas.

Be sure to visit our website (econforum.uoregon.edu) for updates on additional speakers….registration available in early July!

Special thanks to our Presenting Sponsor KeyBank, our silver sponsor the Portland Business Journal, and our bronze sponsors the Port of Portland and Colliers International.