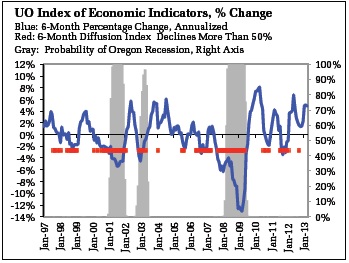 While economic indicators softened in March, they still point toward continued growth in the Oregon economy. Highlights of the report include:

• Following two months of strong gains, the Oregon Measure of Economic Activity fell to -0.04 in March from 0.66 the previous month. Note, however, that this measure can be volatile. The three-month moving average, which smooths such month-to-month volatility, rose to 0.40 where “zero” for this measure indicates the average growth rate over the 1990-present period.
• The manufacturing and construction sectors contributed positively to the reports while the household and services sector were a net drag on the overall number. Overall, the Oregon economy is growing near to somewhat above its average rate since 1990.
• The University of Oregon Index of Economic Indicators™ edged down 0.1 percent in March, the first decline since last July. Initial unemployment claims fell again, reaching their lowest level since September 2007. This suggests that conditions in labor markets will continue to improve.
• Residential building permits, nondefense, nonaircraft capital orders, hours worked in the Oregon manufacturing sector, and the interest rate spread all remained largely unchanged in March. In contrast, consumer sentiment and the Oregon weight-distance tax, a measure of trucking activity both fell slightly.
• It is normal to experience occasional declines in the measures of economic activity during recessions. Both measures suggest continues growth in Oregon, although the pace of activity may ease in response to tighter fiscal policy (higher taxes and spending cuts, including the sequester) initiated in the first part of this year.