University of Oregon Regional Economic Indexes
By Tim Duy
Oregon Economic Forum
University of  Oregon
We thank KeyBank for their generous support of this project.

• Regional divergence widened further in February, with Portland pulling ahead of the rest of the regional economies. Highlights of the release include:
• The moving average measures of the regional areas – where zero represents a region’s average growth since 1998 – are in a range of 0.31 for Portland Metro to -0.48 and -0.94 for the Salem and Rogue Valley regions, respectively.
• The Eugene-Springfield and Central Oregon regions are growing at close to their average pace. In a sign that labor markets conditions have improved substantially since the recession ended, initial unemployment claims are now contributing positively to the Portland, Eugene-Springfield, and Central Oregon measures.
• Also note that in most regions housing-related activity are hovering just around the zero mark and thus have a relatively neutral impact on regional measures. The exception is the Rogue Valley, where low levels of building permits combine with high unemployment to weigh on the measure of activity.
• While Salem’s measure continues to be below zero, the region has improved significantly over the past year; the -0.48 moving average measure this month compares to -0.95 a year ago.

Reminder: The regional measures are prone to potentially large swings due to the volatility of some of the underlying data, particularly measures of employment. The moving average measures smooth out much of that volatility. 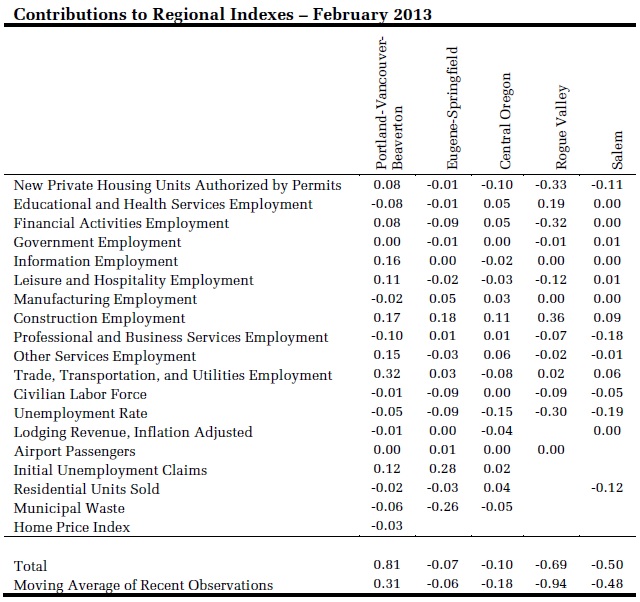