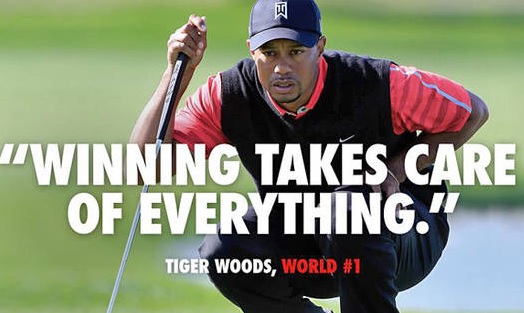 “Tiger has always said he competes to win. When asked about his goals such as getting back to No. 1, he has said consistently winning is the way to get there. The statement references that sentiment and is a salute to his athletic performance.”

“This is another case of Nike being Nike. The tagline will reinforce both people who support Tiger or are put off by him. For some people, this will be seen as another case of an athlete who doesn’t understand how a big part of society views what he’s done.”

“And this is just another in a long list of recent examples of how Nike has lost its soul. In the past year, we have seen a Nike shoe designer mock Derrick Rose’s knee injury on Twitter and Nike chairman Phil Knight’s tone-deaf attack of Joe Paterno’s “critics,” also known as kids who were raped on Penn State’s campus by an assistant coach that Paterno let hang around long after evidence had mounted. The company recently has had to part ways with runner Oscar Pistorius, accused of killing his girlfriend, and cyclist Lance Armstrong, guilty of Living Wrong.The soul, I am guessing, is the first thing to go on the long road from brilliant idea to billion-dollar corporation. And soul has little to do with profits, so again Just Screw It.”

Not everyone has forgiven Tiger, as this controversy makes clear. And no one would suggest that his recent string of success somehow absolves him of his personal failings.But the fact is that athletes are ultimately judged on performance, and barring a truly career-ending scandal — Oscar Pistorius’ murder charge or Lance Armstrong’s admission of doping, for instance — they can always get back in our good graces by performing well on the field.Nike probably shouldn’t have come right out and said so in their ad. And to be fair, the quote in question was initially uttered by Woods when he was asked whether he was preoccupied with his ranking.