By Oregon Tax News
The economic impact of high student debt is a growing concern as more young adults are entering the workforce with a staggering debt burden and limited employment options.  Some experts say the student loan industry is a bubble similar to the housing bubble that popped five years ago.  Though not all agree with that assessment , there are troubling trends related to student loan debt that have economists and lawmakers increasingly worried. 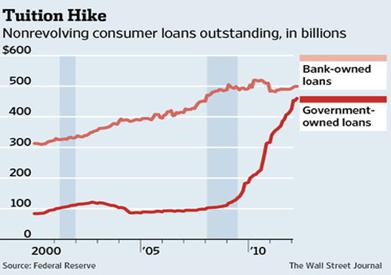 Is the student loan industry a bubble?  Though widespread default on related debt would be painful, Phil Izzo of the Wall Street Jounral says that it would not approach the devastation of the housing crisis.  That’s because housing market dwarfs the student loan market.  Though student loan debt has spiked by 368 percent since 2007, it still represents a fraction of the economy compared to residential mortgages.   Most of the increase has come from  federal government loans, which have more than quadrupled the last five years.  Taxpayers, as opposed to investors, would be on the hook and the pain would be subsumed in the larger U.S. deficit.  That said, the growing debt burden of the younger generation will continue to have a drag on the economy as joblessness remains high for college graduates, many of whom have tens of thousand of dollars in school loans. 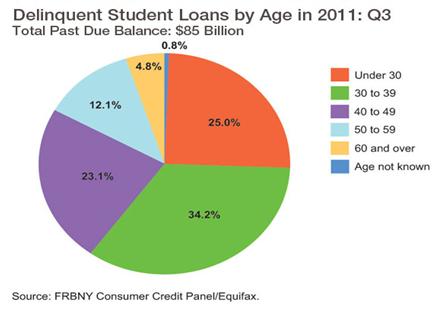 A recent report from the Consumer Financial Protection Bureau, however, notes some ominous similarities between the housing bubble and a possible student loan bubble. Among other things, more and more stories are emerging of bad borrower experiences with unresponsive private loan servicers.  Additionally, high student debt and a bad job market have left many recent graduates in over their head.  Forty percent of households are headed by individuals under 35 years old who are in debt with student loans.  Six million more adults ages 25-34 have “failed to launch” and are living with their parents.  A growing number of these are defaulting on their loans. 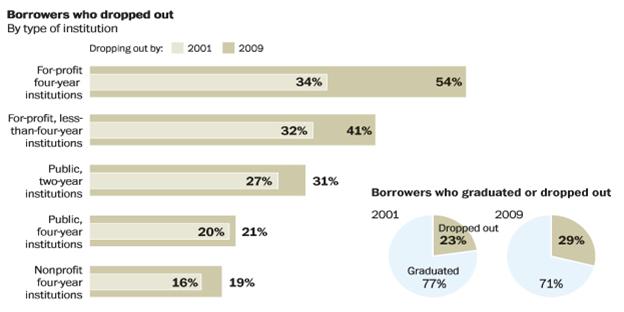 Perhaps most troubling, students are increasingly racking up debt only to dropout of college before they graduate.  The college drop out rate now stands at 29 percent—up roughly 25 percent since 2001.  Consequently, many students find themselves thousands of dollars in  debt from one or two years of college with no degree to show for it and without the access to higher paying jobs that accompany a degree.  Drop out rates have been growing across all types of institutions.  However, the increase has been especially acute among for-profit institutions, whose growing number of students amass more debt than students at traditional institutions.  More than half of all students enrolling in four-year, for-profit institutions drop out, often with significant debt.  Higher drop out rates are prompting questions about the federal government’s long-time policy to increase access to higher education without a corresponding effort to ensure higher graduation rates.   Improving the college graduation by 2020 is one of President Obama’s top educational priorities.