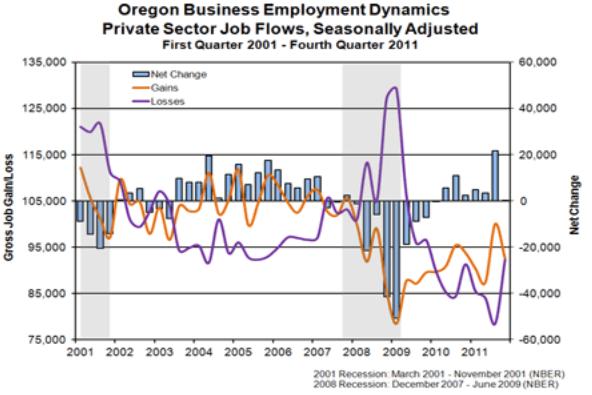 In the fourth quarter of 2011, seasonally adjusted gross job gains in Oregon’s private sector decreased from 100,035 to 92,624, while gross job losses increased from 78,502 to 92,328 (Graph 1). The result of these changes was a seasonally adjusted net gain of just 296 jobs in the fourth quarter of 2011. This is the smallest quarterly net job gain for Oregon in almost two years, and stands in sharp contrast to the unusually large gain observed in the prior quarter.

It is likely that irregular seasonal hiring patterns in agriculture contributed to both the impressive gains in the third quarter of 2011, and to the seemingly lackluster growth in the fourth quarter. The 2011 growing season was characterized by one of the coolest springs on record in Oregon, which significantly affected labor-intensive crops such as cherries, pears, grapes, and apples.

In these industries, fewer seasonal hires than usual had taken place by June 2011, and more workers were still on the payrolls in September. This contributed to high gross job gains and low gross job losses over the third quarter. The situation was reversed in the fourth quarter because September started out with a larger-than-usual number of seasonal workers on the payrolls. Gross job losses piled up as agricultural hiring wound down for the year, with fewer gross job gains to offset them.

Business Employment Dynamics data are seasonally adjusted to smooth out ordinary seasonal fluctuations, but the atypical weather patterns of 2011 resulted in hiring that was far outside the norm. A number of other industry sectors did indeed experience stronger growth in the third quarter of 2011 than they did in the fourth, but not to the striking degree that the data suggest. A portion of this apparent spike is likely the result of a shift in normal seasonal hiring patterns within crop production industries brought on by an unusually cold spring and late growing season.