Food for Thought: Optimism and Intel

Almost everyone expects the recovery to remain lackluster into at least the middle of next year. However, a growing number of economic forecasters are becoming more optimistic over the medium term (2-5 years out). For example, see Moody’s Analytics (video, 2:30 mins) With a new expansion announced at Intel, improved market conditions for many wood product and metal firms, and healthy sales expectations among area retailers, many local market watchers are becoming more optimistic as well.

The case for increased optimism at the U.S. level stems from the fact that the balance sheets of both firms and households are in very good shape, giving many ample ability to spend and invest. With financing costs low and corporate profits high, a great deal of spending and investment stands to be unleashed as soon as some of the uncertainty that is obscuring the near term outlook is cleared away.

One major source of uncertainty is the nature of future federal spending and tax law. As such, there is hope that when federal policies become clearer after the presidential election, growth will be triggered. Settling the tax rate, government spending patterns, cuts to entitlement programs and/or defense, raising the debt ceiling in a reasonable fashion and putting the public finances on a path toward sustainability (likely trying to stabilize the debt to GDP ratio) are the goals, and achieving some resolution to these would help to alleviate the uncertainty regarding public policy. It will not likely be a smooth process to reach the end point. However, should policy emerge by the middle of next year that addresses all of these concerns in a credible manner, the case for an optimistic outlook improves dramatically.

Businesses are very profitable and sitting on large cash, or liquid, reserves. Households’ balance sheets have repaired quite a bit in recent years and while net worth is not back to pre-recession levels it has been increasing strongly. Home prices are rising and the stock market has regained much of the losses suffered during the recession (even with the recent declines, the S&P 500 is up 12% since the beginning of the year.) Delinquencies on consumer debt are down. Although, mortgages 90+ days delinquent or in foreclosure remain high, rates of mortgages delinquent 1 or 2 payments are back down to low levels. All of these indicators point overwhelmingly toward a stronger expansion, yet we’re not there yet. When will we be there and what will be the trigger, if any?

Of course, uncertainty is not isolated to federal policy. International issues in Europe and the Chinese slowdown are two equally prominent concerns. However, the U.S. historically has not fallen into recession due to external weakness alone. Overall, a compelling case for optimism can be made, and a lot of the indicators do look good. However, the line of reasoning made by some forecasters today puts federal policy and the federal decision making process as the lynchpin. Your mileage on that may vary.

Setting aside the broader economic environment, Oregon’s regional economy has displayed many encouraging signs in recent weeks. To what extent does the good news, including the recent big expansion announcement by Intel a) factor into the forecast and b) reflect a more general sense of optimism moving forward which would lead to stronger growth? This is a discussion we’re having with our advisors as we prepare for the next forecast.

As for Oregon and the recent Intel announcement, it is obviously good news. It is always encouraging to see a capital-rich company (both physical and human capital) like Intel effectively re-commit it’s longer term operations to the state. When talking about employment numbers, it is sometimes hard to grasp the sheer size of both the company and the state economy overall. Intel currently has nearly 17,000 employees in the state, per The Oregonian article and statewide employment is over 1.6 million. That means the company is about 1% of statewide employment or 1.3% of statewide private sector employment. The wages and income shares are about 2.5 times larger seeing as the company pays, on average, much higher wages than the state average. So what are the economic impacts from the expansion(s)?

Two years ago, it was estimated that the expansions in both Arizona and Oregon would include about 8,000 construction workers and about 800 full-time Intel workers after completion with approximately 3/4 of the totals being in Oregon. This time there are no estimates being provided currently, however it can be informative to examine the past couple of years. First, manufacturing overall has been increasing in the Portland MSA however these gains began prior to the first announcement and the bulk of the increases have been in other sub-sectors. That being said there have been some employment gains in Computer and Electronic Products, just not a lot so far. Also, they have been building the past two years and the new facility has not been operating at capacity and will not do so until a few months from now. Given the recent announcement, including retrofitting the older Fab 20, it is likely that the direct employment impact of the new, larger facility will be higher moving forward. Certainly higher than what the current employment figures show. 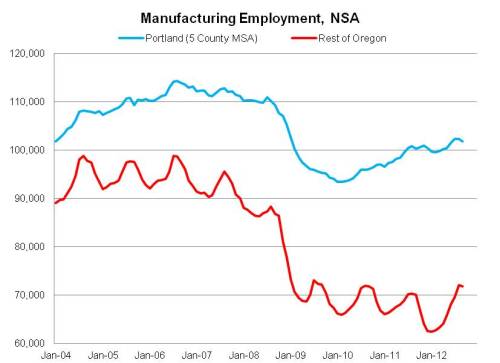 As for the construction impact of the project, that is very important for an industry that experienced a 35% employment decline from 2007 through 2010. One way to examine the first phase of the expansion’s impact is to compare Oregon construction with national trends. In terms of residential construction, we know that Oregon housing permits and housing starts have increased in-line with the national figures in recent years, so one would expect that residential-related employment would also follow national patterns, thus leaving any differences to be explained largely by public sector works, commercial real estate and obviously the Intel expansion. Here is a comparison of the industry, with employment indexed to 2010q1 to illustrate the state gains relative to the national data. 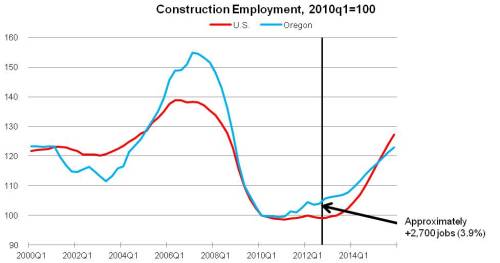 Oregon has seen nearly 4% employment gains in construction over the past two years while the nation has not seen any sustained increases. In The Oregonian article, John Killin, president of the Associated Builders and Contractors Pacific Northwest chapter, cites that the Intel expansion was responsible for the bulk of these gains. We do not have information that can either verify or deny the claim, so we are taking it at face value. Obviously this is a big gain for the industry and with the recent announcement, these jobs are expected to continue for another couple years. Overall, as the residential market continues to come off their recessionary lows, those gains are expected to drive the industry forward over the longer term.