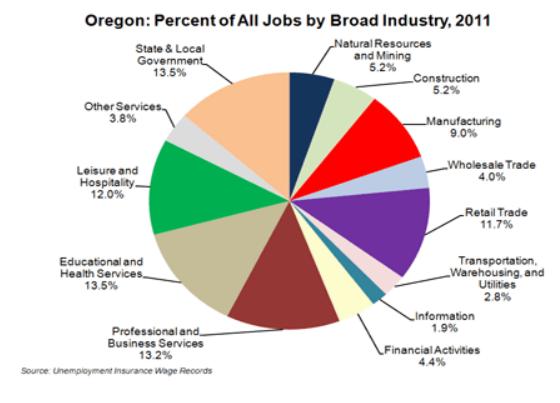 The largest number of jobs (329,234) was held by state and local government workers in 2011. Their share of the jobs pie rose from 13.1 percent in 2010 to 13.5 percent in 2011 (Graph 1). Education and health services was a very close second, capturing 329,159 jobs that year. Year over year, state and local government lost 3,015 jobs and education and health services gained 7,799. Together, manufacturing, financial activities, and retail trade shed 32,620 jobs. The construction and natural resources industries, which lost jobs during the previous year-over-year period, gained 5,657 and 4,100 jobs, respectively.

Roughly 20 percent of all jobs in 2011 paid at least $30.00 per hour and more than one-third paid at least $20.00 per hour. About half of all jobs paid less than $15.00 per hour, almost 2 percentage points lower than in 2010. The vast majority of the over-the-year job losses were concentrated in the smallest hourly wage classes (Table 1); in fact, nearly 108,000 jobs paying less than $20.00 per hour were lost in 2011. This is not surprising, given the concentration of job losses in leisure and hospitality. In general, the smaller the hourly wage class, the larger the number and percentage of job losses. Jobs were gained in all wage categories of $30.00 per hour and above.

To see detailed annual tables, visit www.QualityInfo.org and go to the Wages and Income link to find Quarterly Wage Tables.